Breaking down CN and CP’s battle for Kansas City Southern

Canadian railroads are terrific examples of the types of businesses we like to own. They own irreplaceable assets that provide essential services, have a significant cost advantage vs trucking, and have strong pricing power. Given the low population density and reliance of the Canadian economy on resources, CN Rail and CP Rail together move about 70% of inter-city surface freight in Canada and virtually all the lumber, grain, fertilizer, and coal production. Most Canadians simply do not realize the degree to which our lives and the economy rely on the two major railroads.

On the other hand, there is only so much stuff for the Canadian railroads to move. Revenue Ton Miles (RTMs) have only grown at around 2% per year over the last decade. Earnings can be boosted by price increases and cost efficiencies, but both can only be pushed so far. Given their dominance, there is minimal additional share to be gained from trucking. To grow volumes, CN and CP need to look to build infrastructure (such as additional export terminals) or make acquisitions.

Under legendary railroader CEO Hunter Harrison, CP pursued mergers with CSX in 2015 and Norfolk Southern in 2016, both of which were rejected due to regulatory concerns. Given the significance of railroads to the North American economy, regulators require any major railroad deal to demonstrate that the deal is in the best interests of the public and enhances competition (the 2001 standard) and no Class I railroads have successfully merged since then.

At its very core, this is what CP Rail and CN Rail’s battle for Kansas City Southern (KCS) is about. Although both CN and CP will talk extensively about the potential synergies, the main motivation is simply that this will be the last opportunity ever for CN or CP to acquire a Class I railroad and grow their network.

“Often a deal like this the stars have to align, and I would suggest that the stars have aligned to make this deal happen”. Keith Creel, CEO of Canadian Pacific

“Definitely at this point, the board of KCS has decided to crystallize the value for KCS shareholders and the company is now available for change in transactions. It’s not very often that a Class I railroad or a large property becomes available.” Jean Jacques Ruest, CEO of Canadian National

Kansas City Southern is the smallest Class I railroad, and its network connects the grain producers from Kansas City (where it shares a terminal with CP Rail) with chemicals and energy processing region in Louisiana and Texas, before going down to Mexico where it controls the Northeast Railroad concession. The Northeast Railroad is the dominant freight route in Mexico where KCS moves grain and petrochemicals and refined products down to Mexico for consumption or export, and automobiles and auto parts up to the US.

There are good reasons for a Canadian railroad to own a railroad through the southern USA and into Mexico. Some areas of CP and CN’s business such as Canadian crude may be facing structural longer-term decline and having direct access to the Texas and Louisiana energy and petrochemicals industries provides diversification. Furthermore, the disruption of COVID on global supply chains is leading to increased “near-shoring” of American manufacturing to Mexico and other Latin American countries. The new USMCA agreement will also shift automobile manufacturing to Mexico. Both factors make the Mexico/USA cross-border market an attractive place to be going forward.

Despite asking the Surface Transportation Board not to apply the 2001 standard to the proposal, CP makes a decent case that merging with KCS would enhance competition. CP and KCS combined would still be the smallest of the remaining Class I railroads, and as shown on the map below, CP has no directly competitive routes with KCS. 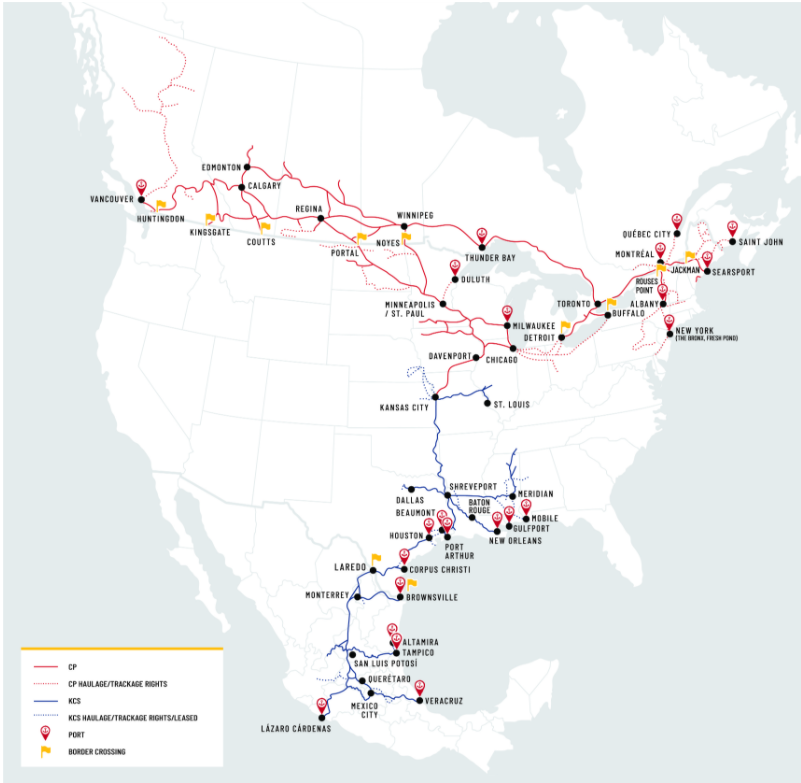 By combining KCS with CP, Canadian and Upper Midwest shippers of energy, chemicals, and bulk can access new markets for processing or export in the Gulf Coast or Mexico, while automobile assembly plants in Mexico have a direct connection to facilities in Michigan or Southern Ontario. Based on comments submitted to the STB,: shippers in these regions are very happy for the new connection.

The deal also provides intermodal competition by opening new connections between Texas and Mexico up to the important Chicago rail hub. Today this route is serviced by Union Pacific and BNSF, and having a direct rail connection between Mexico, Chicago, Vancouver, and Toronto will gain share from trucking (which makes up the bulk of the revenue synergies that both CP and CN expect to generate from the deal).

On April 19, CN Rail crashed the party and offered $325 per share for KCS (vs CP’s bid at $275), sending CNR’s shares down 9%. The most significant difference from CP is that CN already owns tracks down the Gulf Coast, which was obtained from the acquisition of Illinois Central (highlighted below) in 1998 partly to benefit from NAFTA. 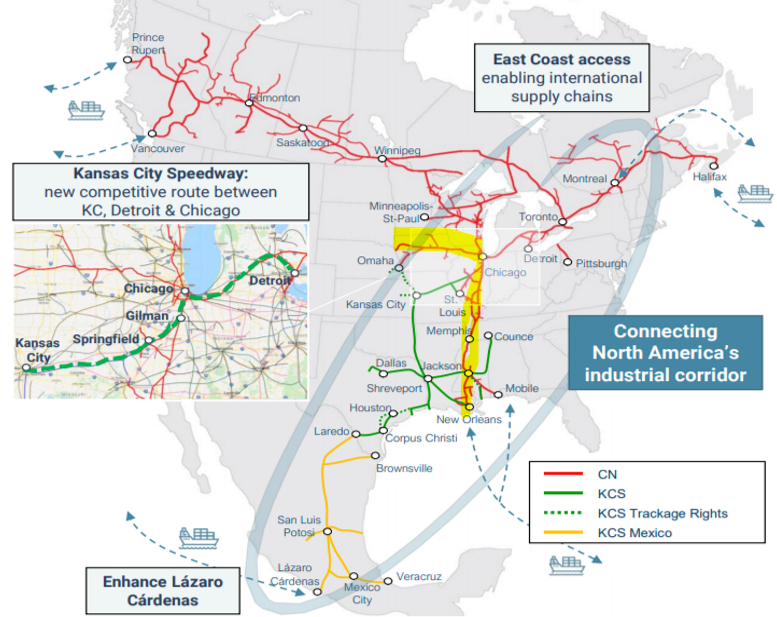 Canadian and Upper Midwest shippers still have improved access to Mexico but shippers down to terminals and ports in Mobile, New Orleans, and Jackson would have one less option and it seems likely that CN will face more regulatory resistance than CP over the merger. CN clearly understands their case is weaker than CP, and unlike CP, the press release and slide deck on the offer barely discusses competition, instead touting the ESG benefits from the combination.

On the other hand, it would be silly for CN not to even try despite the slim chance of regulatory approval. As discussed above, this is likely a once-in-a-generation chance to grow the network. A successful CP merger with KCS creates direct competition for CN’s routes, which is worth defending. At the very least, it puts pressure on CP to increase its bid and pay more. There would likely be a long review period, with the deal not expected to be fully completed until the second half of 2022. One and a half years is a long time, and perhaps KCS decides to stay independent if the deal fails.

For now, CP is not calling CN’s bluff, betting that the STB would not even allow CN to place KCS into a trust to begin the regulatory process.

Regardless of the outcome, both railroads continue to be terrific businesses and whoever ends up with KCS will have a superior growth profile and increased geographic and product diversification which will deserve a higher multiple.