In talking to other investors about Costco, the main question is whether Costco can still thrive in a world where Amazon and others can deliver an infinite selection of products to your house in one or two days. As this blog will discuss, e-commerce is more an opportunity than a threat for Costco and the management has cleverly designed its e-commerce strategy in a way that grows Costco’s market share without cannibalizing its core business.

Costco wants you to shop in store

Costco’s business model of operating large warehouses where paid members can purchase a limited selection of high-quality products at low prices is widely appreciated both by investors and the general public. Costco’s core strategy is to “provide members with a broad range of high-quality merchandise at prices that are consistently lower than elsewhere” and every aspect of Costco’s business model is designed to achieve lower prices for consumers including the store location, low stock keeping unit (“SKU”) count, and product sourcing.

An important element in achieving low prices is simply getting people to shop in-store. As any Costco member would attest to, you always end up spending more than you planned to when going to Costco because you see something in the aisles that looks like a great deal. The key drivers of traffic to Costco are gas and fresh groceries, so a typical sales process for a Costco member might be as follows:

The better Costco’s merchandising team is at sourcing hot & relevant items, the more Costco members will spend while browsing the aisles, which perhaps counterintuitively leads to lower prices because of increased inventory turnover and buying power. This has been an important driver of Costco’s sales growth given the low SKU count, and it is critical for Costco’s business model that shoppers continue to physically visit the stores. Costco’s management understands this better than anyone, which is why Costco works so hard to maintain low prices for items that encourage traffic such as cheap gasoline, food court, and especially the $4.99 rotisserie chicken. For the same reason, Costco has resisted initiatives such as “Buy-Online, Pickup-In-Store” and “Curbside pickup” which are labor-intensive activities that reduce basket size by allowing customers to avoid browsing aisles which ultimately leads to higher prices.

Critics will assert that this model is obsolete in a world where consumers increasingly value convenience and Amazon or DoorDash can deliver anything within one day, but it’s important to remember that any shopper that decides to visit a Costco rather than buy things on Amazon or a nearby supermarket has already chosen low prices over convenience. Costco deliberately locates warehouses in industrial space that is cheaper but less convenient and the lineups for gas and returns are as long as ever, yet traffic continues to rise even before the COVID pandemic. Simply put, people like buying high quality goods at low prices and are willing to fight crowds and drive long distances to save money. 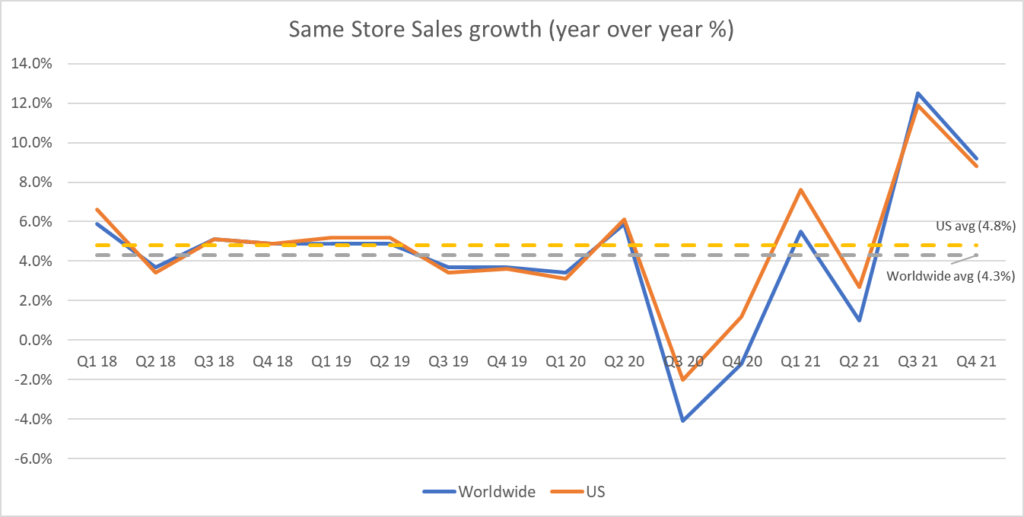 This is also why Costco’s partnership with Instacart (as shown below) for same-day grocery delivery at higher prices minimally cannibalizes traffic since the shopper in that case has already made a conscious decision to pay higher prices for the convenience.

The trick for Costco is to develop an e-commerce strategy that does not cannibalize traffic and since fresh food (including meat, bakery, fruits, and prepared foods) are the largest driver of traffic, Costco can sell everything at low prices except for fresh food online without risking material cannibalization. This is exactly what you see if you go on Costco.com today.

Someone who makes an intentional decision to purchase the Lego Advent Calendar and a bag of Kirkland mixed nuts on Costco.com outside of the grocery run would merely “lock-in” the sale of the product for Costco without minimizing Costco’s overall share of spending from the consumer. Furthermore, the consumer would likely buy other random things on their normal Costco grocery visit. On the other hand, Costco allowing free delivery of fresh groceries at in-store prices would be cannibalistic and lead to a small basket overall.

Costco’s results are affirming this strategy: in the most recent earnings call, Costco CFO Richard Galanti reported that Costco members who shop online may visit a few times less per year but end up spending more with Costco.

The key for Costco to successfully compete against Amazon in e-commerce is Costco’s unmatched reputation for low prices and high quality. Costco has already convinced over 100 million members that Costco has unmatched prices for high quality products, and e-commerce allows Costco to significantly increase its product selection and gain share of its members spending which increase bargaining power over Costco’s suppliers. Costco can furthermore use all the engagement tools in the toolbox such as the 2% executive member discount, the Costco credit card reward, and email promotions and coupon books to drive e-commerce sales. Given the issues that Amazon Marketplace is currently facing with counterfeit and unbranded products, Costco.com is well positioned to provide a trustworthy alternative to purchasing branded products.

One specific area that Costco is looking to differentiate is in large bulky items such as appliances and furniture that are logistically difficult for Amazon to fulfill and often require special “white glove” service. Costco acquired a logistics provider to provide white glove delivery and today internally fulfills 24% of its US e-commerce sales and sells $1 billion annually in appliances. Costco’s efforts to sell bulky items also benefits the in-store business. By shifting sales of large patio furniture and exercise treadmills online, Costco can free up significant space in the warehouses to sell faster-turning items that would be part of a normal grocery visit.

Finally, e-commerce allows Costco to build out additional service offerings which are high-margin sales for Costco while allowing members to save money. Examples include travel agency (including cruises, hotels, resorts, and car rental), insurance brokerage, home renovation leads, and the Costco Auto Program, where the hotel chains, insurance companies, car rental companies, and car dealers offer large discounts (upon which Costco can layer on an additional 4% rebate) to access Costco’s massive membership base. Today, Costco is the largest car seller in the US, selling more cars annually than AutoNation.

The economics for Costco e-commerce are excellent. Costco has a direct connection with its members and does not spend money on advertising, unlike most e-commerce businesses that need to worry whether a customer’s “lifetime value” exceeds the marketing cost to acquire the customer. As such, Costco’s online sales are immediately profitable, while increasing the stickiness of the Costco membership by providing even more opportunities for members to save money. Given Costco’s large scale and strong reputation, Costco is well-positioned to take advantage of e-commerce to gain an even greater share of consumer spending around the world.