In recent years, it has become common for companies to include a section on Environmental, Social, Governance (ESG) during investor calls and presentations. As an example, here is a slide from RioCan explaining their initiatives on ESG: 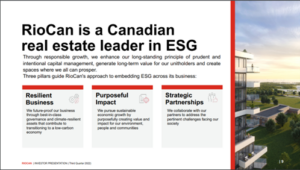 I usually glaze over these sections not because a company’s corporate governance, environmental and social impact are unimportant, but because ESG reporting guidelines often lead to irrelevant details that are financially immaterial and tell you nothing about the company’s true impact to society. A key motivation for ESG reporting is for companies to boost their “ESG Scores” to ensure their shares are included in ESG-focused strategies. For example, Blackrock, the largest asset manager in the world, has warned companies in its funds (basically all companies), that it will “increasingly vote against management and board directors when companies are not making sufficient progress on sustainability-related disclosures”.

For the Canadian energy companies however, I think it is wise to pay close attention to the ESG section. In Canadian Natural Resources’ 2023 budget released in November 2022, there was a hefty section on ESG initiatives with a special focus on environmental initiatives. Nor is this just “investor marketing” material: Canadian Natural Resources spends billions every year on new technology and capital projects to reduce greenhouse gas emissions and water usage in oil & gas operations. Furthermore, Canadian Natural Resources together with other large oil sands producers (called the Pathways Alliance) plans to spend an additional $24 billion on emissions reductions projects through 2030 including a large carbon capture and storage facility. To be sure, some of this will be funded by the government, but ESG is financially relevant for the energy sector.

There is good reason for Canadian energy producers to invest so heavily in environmental initiatives, apart from simply making Canada, and the world, a cleaner and nicer place to live. From a pure economics perspective, oil sands production is highly carbon-intensive because of the large amounts of power and natural gas used in the bitumen extraction process. Investments to improve efficiency not only reduce emissions but also reduce operating costs. As an example, Canadian Natural Resources is currently testing a new technology called In-Pit Extraction Process that processes bitumen directly at the mine face which if successful, would eliminate the need for tailings ponds, reduce emissions by 40%, and reduce production costs by $1-$2 per barrel.

Furthermore, efforts to reduce global emissions are likely to increase over time, resulting in mechanisms like cap-and-trade systems or carbon taxes, which will make energy production in Canada increasingly disadvantaged relative to countries like Libya that do not have the same environmental and reporting requirements.. The more Canadian oil sands producers can reduce emissions, the more competitive Canadian energy will be relative to other global sources. Put this another way, efforts to reduce emissions will allow energy producers to increase production given the reduced environmental impact per barrel produced.

Given the motivation for countries to diversify their energy supply away from Russia as well as Canadian efforts to develop export capacity, it is a critical time for Canadian energy producers and the industry to demonstrate their commitment to the environment. Producers such as Canadian Natural Resources that do so will be able to increase production in the future.