Stores and malls are here to stay – at least in Canada

At the same time as Canadian businesses have been getting ready to reopen after prolonged COVID-19 shutdowns, companies have begun reporting earnings for Q1, and the message across the board is consistent. It goes something like this:

“We experienced a sharp decline in business activity starting in the latter half of March with small signs of improvement throughout April although any meaningful recovery will only come when society reopens. As such, we are suspending our guidance for the full year…”

A good question that many sell-side analysts are asking during quarterly conference calls with retailers is how COVID-19 will change the long-term opportunities for the business.  The answers indicate that there is a general consensus that COVID-19 will accelerate secular trends that have already been happening. Perhaps the clearest and most mentioned example of this is the growth of e-commerce shopping at the expense of physical retail. The stock market has recognized this as shown by the underperformance of retail-focused Real Estate Investment Trusts (REITs), and the contrasting enthusiasm for e-commerce stocks like Amazon and Shopify.[i] 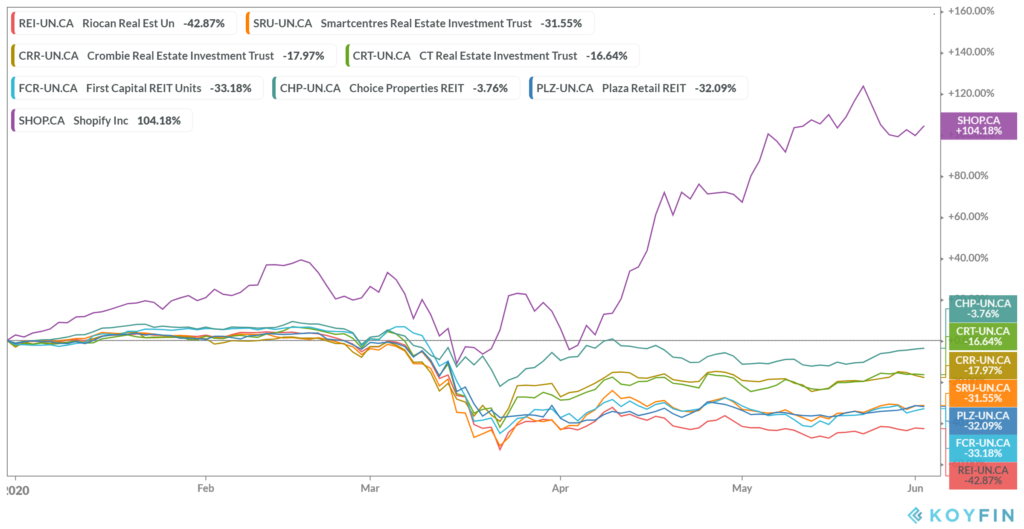 Yet, Canada is not the US and there are good reasons to believe that situation is not as dire as it seems for the Canadian traditional retail sector.  Here are some of the reasons why.

Canada usually lags the US by a few years for major trends (e.g. cord-cutting), and this is true in e-commerce, where penetration is only 10% of total retail sales in Canada vs. 16% in the US in 2019. Amazon is of course the dominant company in this sector. Although e-commerce will certainly grow, Amazon’s potential in Canada as a pure e-commerce player is restricted because of structural challenges presented by the geography.[ii]

In general, there are four main advantages of e-commerce over physical retail:

1) Convenience: You can buy things 24/7 without leaving your house, and have it shipped to you quickly.

2) Selection: The number and variety of products that can be sold are not limited by the shelf space in the store.

3) Pricing: Prices can be cheaper due to the lack of sales staff and the costs of owning or renting expensive retail space (though this may partly be due to Amazon’s willingness to sell goods for essentially zero margin).

4) Infinite reach: A seller can easily reach quite literally the whole world through the internet.

In practice, Amazon faces real-life constraints such as tariffs, logistics, inventory selection and warehouse constraints and there are trade-offs in prioritizing each advantage: for example, convenience and selection might come at the expense of pricing since it’s expensive to have both fast shipping and a wide selection of inventory.

Canada is not an ideal country for e-commerce, however. Ours is a very large place that simply doesn’t have that many people. In the words of a former head of Amazon Canada:

“I think the biggest reason that e-commerce has lagged behind other marketplaces in Canada is really around outbound shipping economics to customers. You’ve got this country that runs the entire length of the U.S., with approximately 10% of the population, and you’re just not able to get enough density for it to be economically viable.”

Building national coverage for e-commerce in Canada requires massive investments in logistics, transportation and warehousing with profits from the large cities required to cover unprofitable deliveries from Amazon’s fulfillment centers to rural areas.[iii] To be sure, about half of Canada’s population lives in the Quebec City to Windsor corridor, with another 4m people living in the Lower Mainland in British Columbia, but Amazon today still only has warehouses in 3 provinces, with orders from Halifax or Winnipeg having to be fulfilled by air.

Second, the low population makes it tough for Amazon to maintain a wide product selection. Most consumer goods sold in Canada are manufactured in the US or elsewhere, and Amazon needs to pay tariffs to bring these products into Canada. Because Canada’s population is only about the same as California’s, the inventory risk that a product won’t be sold is much higher. Amazon attempts to solve this issue to some extent by using 3rd party fulfillment, but that comes with loss of control over the user experience and pricing. 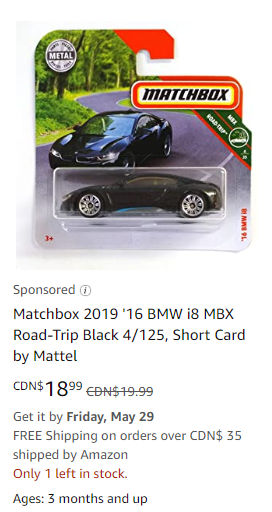 Both of these factors ultimately lead to higher prices which is a big deal when surveys show that Canadian consumers are highly price-sensitive. It is no secret to Canadians that Amazon Prime in Canada is simply a worse overall value proposition relative to the US: the product selection and pricing are worse, with less ancillary Prime membership perks. Although Amazon does not disclose Canadian figures, Amazon has not raised Prime membership fees in Canada for years which indicates that things are not going as well as in the US. Simply put, the maximum value proposition of Amazon in Canada, while valuable to many people, is less than in the US.

Some of these density issues can be solved by strategically locating warehouses with select items closer to the consumer, but this concept already exists: traditional specialty retail. The point of being a specialty retailer is to make a wide selection of products available in conveniently located places, making it a logical place from which to fulfill online orders.  Because the growth of Amazon (and e-commerce shopping overall) has been slower, retailers in Canada have the luxury to observe trends happening in the US and to make the necessary investments to transition to an e-commerce world.

This is further supported by the fact that the Canadian retail landscape is very concentrated: 10 companies control 48% of retail sales and the top 100 control 75%. 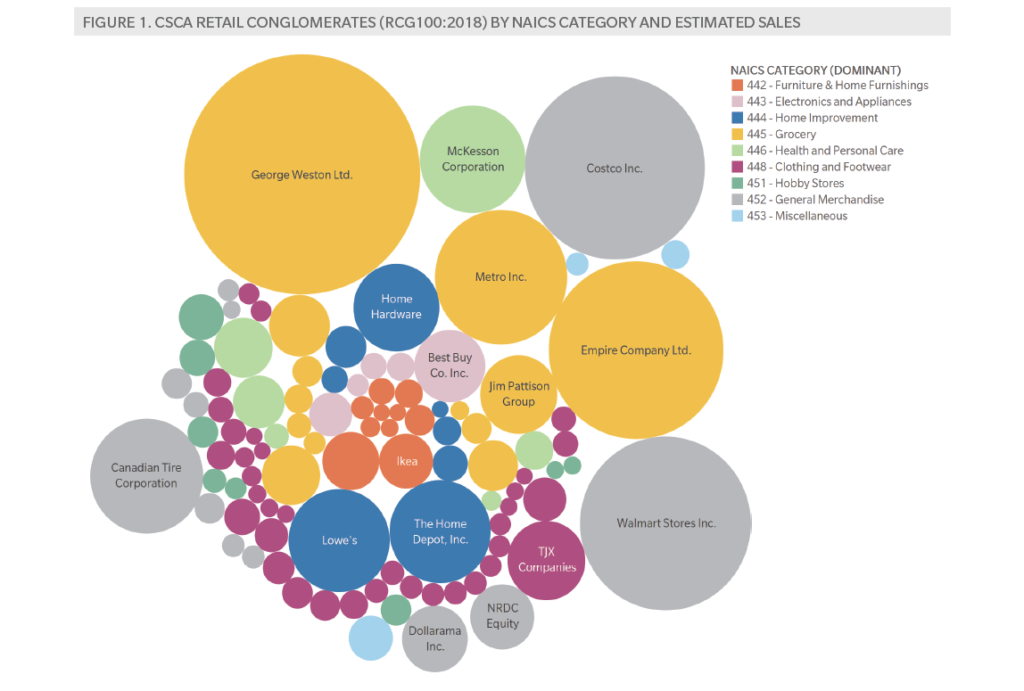 The largest Canadian retailers are big and powerful with multiple banners addressing different markets, with Loblaws and Canadian Tire diversifying beyond retail into financial services as well. US-originated retailers also have a large presence: Costco and Walmart are the 2nd and 4th largest retailers respectively, while Best Buy, Home Depot, Foot Locker and Winners are all the largest retailers in their respective space.[iv] For many retailers, the Canadian operations are profitable crown jewel operations with less competition. Toys R Us has managed to continue operations in Canada even after undergoing bankruptcy in the US.

All of this – a weaker Amazon combined with strong retailers – helps the retail sector gain share of voice against Amazon and combat the consumer instinct for Amazon to be the default place to shop. The key is not that Amazon can’t open new warehouses in Halifax or increase its inventory selection, it’s that large traditional retailers with their established footprints are much better positioned to compete and maintain share going forward.

This has been demonstrated during COVID-19 as Amazon was forced to restrict its selection of goods (both in Canada and the US):

Many Canadians who weren’t able to buy what they wanted on Amazon are discovering the wide selection of available inventory and easy customer experience (shipping, buy-online-pickup-in-store) that is available at other retailers, and it’s a decent bet that these retailers will keep their share gains going forward.

The state of retail real estate

The retail real estate situation in Canada also supports a healthy retail sector. Canada has much less retail space per capita (16.4 sq ft per capita) relative to the US, which combined with a lower overall e-commerce penetration has led to much higher retail productivity than in the US. Before COVID, retail vacancy rates were a very healthy 3.4% in Canada and under 3% in Toronto and Vancouver, in contrast to the 10% vacancy rate in the US.

Most of the tier 1 malls in Canada are owned by Cadillac Fairview, Ivanhoe Cambridge, or Oxford Properties, which are in turn owned by Canadian pension funds. The properties are renovated, well-maintained, and located in easily accessible areas. Overall department store penetration is low with no overhang from Macy’s and JCPenney, and higher-end department stores like Nordstrom and Saks Fifth Avenue have much smaller footprints.

Most retail-focused REITs in Canada are grocery-anchored or street-facing plazas, and some of them are real estate spinoffs of major Canadian retailers such as Loblaws, Canadian Tire, and Sobeys with a large percentage of rents coming from their former parent or grocery. Furthermore, another large chunk of rents tends to come from large companies such as Canadian banks, Dollarama, Winners, or Tim Hortons. This has served the sector well during COVID-19, with rent collections in April performing much better than retail REITs in the US, even before considering potential government rent assistance programs. 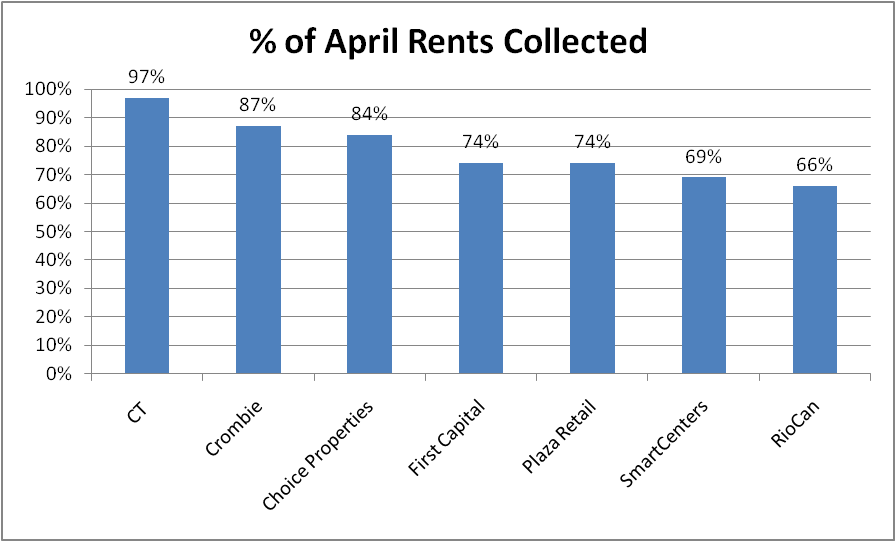 A common narrative among retail real estate investors is that malls and retail will evolve to be 1) omni-channel fulfillment centres and 2) social hubs with entertainment and social settings.

‘While they come from a wide range of retail sectors and have managed to be successful for a variety of reasons, these retailers of the future all have one thing in common: they’ve been expanding their physical store counts to help them interact with customers directly and as a way to fulfill online orders more efficiently by locating their inventory closer to where customers live and work.

We’ve also been investing and repositioning and densifying these high-quality locations into mixed-use entertainment destinations by adding residential, hotel, and entertainment uses to our 40-plus-acre urban sites. Retail shopping centers often serve as the commercial hub for trade areas that they serve and, by adding these additional uses on-site, we’re turning them into mini-cities, offering residents and tenants a dynamic live-work-play environment across the country.”

This thesis is likely to be true in Canada. As discussed above, the challenges in Canada faced by Amazon and pure e-commerce players makes incumbent specialty retailers likely to succeed and use their well-located retail sites for omni-channel. Importantly, this will support a healthy retail sector by driving traffic for surrounding tenants around the anchors, such as restaurants.

Another important trend for Canadian retail REITs is the continued trend of urbanization in Canada, particularly population growth in Toronto, Vancouver, and Montreal. The housing shortages in these three cities are very real and should only get worse if immigration trends to Canada continue. Many portfolios of Canadian REITs tend to be underdeveloped sites in well-located areas and, in many cases, are about the only place left to build well-located condos or rental apartments (i.e. on top of the Canadian Tire or Loblaws). This intensification will of course drive even more traffic to tenants to support rents.

With landlords earning healthy returns and demand for rents, they in turn will invest in renovations, upgrades, and entertainment which will fulfill the “malls as a social hub” vision.

The key takeaway is that the structural challenges faced by Amazon and market concentration in Canada supports legacy retailers in Canada in their transition to e-commerce, which further supports a healthy retail sector overall (and retail REITs) by driving traffic to non-discretionary or smaller tenants. Amazon will certainly continue to grow and open more warehouses, but the lag in investment has allowed incumbent players to build out their own e-commerce capabilities while leveraging their large retail footprints as an asset.

It’s anyone’s guess as to when we will start going back to restaurants or gyms, and there will undoubtedly be short-term rent collection or vacancy issues (Reitmans has just filed for bankruptcy) but it’s a decent bet that in the future Canadians will still be shopping at the same retailers they do today, whether online or in-person.

[i] Whether “the curse” will hit Shopify is a topic for another day.

[ii] My personal opinion is that even in the US, physical retail is not dead. There is an increasing recognition that physical retail drives brand differentiation and conversion in a way that is simply not possible in the US. This is why even companies like Apple and Microsoft maintain large retail footprints.

[iii] Tariffs are the main reason why Amazon cannot simply ship from the US.