I am not familiar with Heartland Express so I cannot comment on their motivations, but the exit of this business represents an important strategic shift for TFI that should lead to higher returns for shareholders going forward.

As I’ve written about previously, CEO Alain Bedard is one of those rare CEOs that combine both operational and financial acumen with a sole focus on generating shareholder returns. Bedard is fond of making statements such as: “TFI’s mission is to make money. We’re not in the business of hauling freight just for the pleasure of hauling freight.”

Given TFI’s consistent focus on capital allocation, this deal was not a surprise for observers of TFI International. CFI has been a constant sore spot for TFI as its most cyclical and capital-intensive division leading to subpar returns on capital. 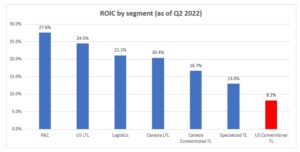 The management has consistently left the door open to a possible CFI sale, and more recently, had polished up CFI for sale by consolidating all of its US conventional truckload assets into CFI while carving out the dedicated truckload division into a new leadership team.

TFI’s tenure in the US conventional truckload industry started with the acquisition of Transport America in 2014, following with the much more significant acquisition of CFI in 2017 from XPO Logistics along with tuck-in deals such as MCT Transportation over the years.

Conventional truckload is a tough business with low pricing power and minimal barriers to entry since shippers largely do not care who their trucking operator is, and anybody with a driver’s license and a truck can start a trucking business. Although TFI recognized the difficulty of the industry, the management had success in the Canadian truckload industry and wanted to increase its presence in the US to prepare for a US listing given the valuation discount between TFI and US trucking peers. TFI also attempted to minimize the risks by purchasing CFI at a low valuation during a weak point in the trucking cycle.

Despite all this, the timing was still poor. The freight market failed to improve and TFI recorded a goodwill impairment charge just 9 months after CFI acquisition. Despite a leadership change, TFI was unable to improve the Operating Ratio of Conventional Truckload to under 90%, even during the exceptionally favorable freight conditions in 2021 (though this was partly due to the acquisition of the unprofitable dedicated truckload business from UPS Freight). 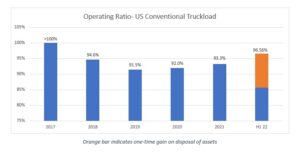 First, CFI will no longer suck up money and managerial attention. The sale of CFI will free up both financial and managerial resources towards the significantly more attractive opportunity in less-than-truckload. This is important because CFI was TFI’s most capital-intensive division, and the management understands that investing in less-than-truckload will generate far superior returns than conventional truckload.

Second, TFI is selling CFI at a time when spot freight rates are expected to fall as supply chains and labor ease up and demand for goods falls.  A sale price of 5.5x peak EBITDA seems attractive from TFI’s perspective, and also allows TFI to reduce capital intensity and cyclicality possibly going into a recession leading to improved earnings and cash flow stability.

Lastly, TFI’s financial profile becomes streamlined. CFI’s performance has complicated the story of TFI to investors after its US IPO in 2020 with the market unsure whether to value TFI as a cyclical truckload provider or an asset-light “compounder”. 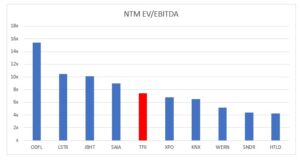 Upon completion of the sale, TFI’s business will be focused on Canada and more attractive segments of the US Trucking market such as less-than-truckload, leading to a more stable financial profile, reduced cyclicality, and improved ability to invest in TForce Freight, which should ultimately lead to a higher valuation for the stock.

Terminology:
Conventional Truckload: A type of trucking where a shipper contracts the entire trailer to move their product. Truckload services can be spot or dedicated.

Dedicated Truckload: A type of truckload service where the carrier makes an agreement with the shipper to take dedicated shipments through a specified route.

Spot Market: Where a shipper purchases truckload services on the open market for a single shipment.

Less-Than-Truckload (LTL): A type of shipping that aggregates small shipments from multiple shippers and takes it to a common destination.

Operating Ratio (OR): A measure of expense efficiency for transportation companies and calculated by dividing operating expenses by revenues before fuel surcharge. Lower is better.