The future of movie theaters- Part 2: Cineworld’s acquisition of Cineplex and the global consolidation of theaters

In a bombshell announcement in December, UK’s largest cinema chain Cineworld announced the acquisition of Cineplex for $2.8b CAD. The price of $34 was about 40% higher than the closing price that day, but lower than the 2018 high. As you can see, Cineplex has had a rough last few years: 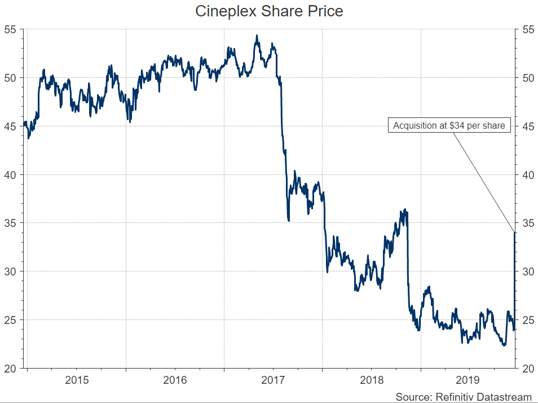 What do we know about the deal?

This is a relatively straight-forward deal. There are no antitrust issues since Cineworld doesn’t operate in Canada, though the deal must be approved by the Canadian heritage minister.

The stock is currently trading a bit higher than the deal price as Cineplex has a 7 week go-shop period. The acquisition will be paid 100% with cash.[i] According to the proxy, the deal was initiated by Cineplex’s side and Cineplex had also explored deals with two other theatre operators which makes it unlikely that there will be a competing offer. CEO Ellis Jacob will be retiring and won’t be staying on, and likely much of the management and corporate staff as well.

Cineplex is the largest theatre operator in Canada with 165 theatres and ~75% market share. There is essentially no competition for movie theatres in major cities: in Toronto for example, Cineplex is basically the only option if you want to watch a first run movie. The #2 cinema chain, Landmark, mostly operates in smaller towns. Cineplex was only able to achieve this level of market dominance because competitors exited the Canadian market over the years and left Cineplex as the default cinema operator.

In addition to the theatre business, Cineplex also has a digital sign business; an arcade game distribution and rental business (of which Cineworld’s Regal Cinemas is a client of); and a Dave & Busters-like games and restaurant concept called The Rec Room. Cineworld has hinted that these are non-core and may look to halt investment to boost cash flow.

In alignment with the US movie industry, Cineplex has lost 10 m moviegoers over the last 5 years, and has been raising prices both on premium format and regular tickets.

The cost side has been pressured as well from higher minimum wages in Ontario and Alberta, while the shrinking number of films released per year means that Cineplex has more unused screen capacity (they currently have 10 screens per location) under long-term leases that are very difficult to sublease given their massive size and unique specifications. Witness all of Cineplex’s efforts over the years to fill excess screen capacity: alternative programming including eSports tournaments, operas, and sports games, to creating various new “theatre + gaming + restaurant” concepts to fill up excess lease capacity

“And the other thing is we continue to look at the square footage and what we are using the theatre for. So in the case of Orion Gate, that was the theatre that was delivering us with box office. We’ve converted it to a Playdium, so that doesn’t come into the totals. And then we look at other opportunities as we move forward through the whole process. And we’ve still got a number of things on the go that we continue to focus on. And to me it’s all about how do we use the available square footage and increase the value that we’re getting out of that square footage within all of our complexes.”

Management deserves praise for their creativity in finding ways to deal with a tough hand, but this is the state that Cineplex is in before selling itself to Cineworld.

The deal makes Cineworld the largest cinema operator in North America and #2 in the world, with just under 9,000 screens. In Cineworld’s own words, there are opportunities to introduce “best practices” at Cineplex which would generate $130m USD of benefits and raise cash flow and margins. Half of the synergies would come from cost efficiencies, and half from new initiatives.

Apart from Cineworld getting the full benefit of initiatives that Cineplex was already working on such as reserved seating, and higher pricing for recliners, I am generally skeptical about the ability of Cineworld to materially improve Cineplex’s operations. Cineplex CEO Ellis Jacob is the chairman of the National Association of Theatre Owners and under his leadership, Cineplex has been a very well-run company: the theatres are clean and renovated, and complaints about a monopoly prioritizing profits over service are rare. 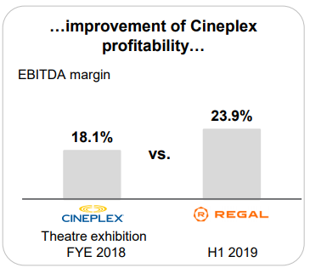 The bulk of the margin improvement opportunity between Cineplex and Regal seems to be from the allocation of corporate costs, rather than any actual operational differences[ii]; even then, $65m USD of cost synergies seems very optimistic since Cineplex’s entire general & administrative cost in 2018 was around $50m USD. How much can costs be driven down through popcorn supplier negotiations? AMC, the largest cinema chain in the world, has an 84% concession margin vs ~80% for Cineplex, so there does seem to be some opportunity there, though again, the point should not be to raise margins, but rather to maximize total popcorn profits.

Cineplex has monetized viewers better than US peers through concessions, pre-movie ads, and in-theatre arcade games. 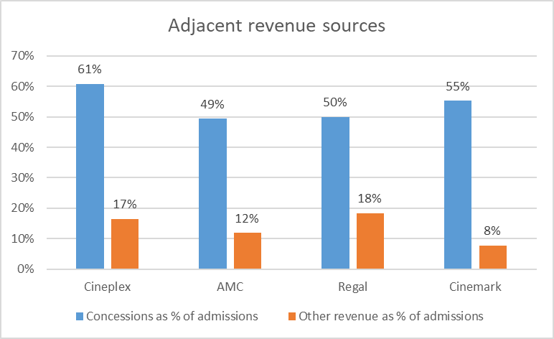 Part of this is due to Cineplex’s slightly lower ticket prices vs US peers, though mix (premium formats) and the current low Canadian dollar have been factors as well.

Does scale matter for theatre chains?

At face value, theatre screens aren’t really scalable: the key expense, film costs, are mostly fixed as a % of box office and film studios are powerful enough such that there are minimal opportunities to negotiate more favorable terms for film costs even on a global scale.

What Cineworld (and other theatre chains) have repeatedly talked about is using scale for marketing co-operation with studios.

Cineworld conference call to discuss acquisition of Cineplex on Dec 26, 2019

“You don’t license your movies or deal in business terms that cross country lines, so I don’t think there’s any big significant difference as it relates to (global consolidation of movie theatres). What it does is you’re able to do some better maybe marketing promotions with the studios because we can be talking about a worldwide marketing push on a particular targeted movie.”

My two cents are that there’s both a positive and negative way to look at something like “marketing cooperation”. On the one hand, there are certainly many creative things that a theatre chain can and does do with targeted marketing through loyalty programs and subscription passes to help boost attendance and box office for the studios, and scale definitely helps with this.

On the flip side, you can view the global consolidation of theatre chains as a logical step to simply keep pace with content distribution that itself has become global, and I think this is really the key behind consolidation in theatrical distribution. In a world where Netflix and Disney+ can distribute content to a global audience over the internet, theatre chains also need to be global in order to maintain or attempt to maintain their share of distribution economics. It’s one thing for Disney to (hypothetically) attempt to shrink the theatrical release window in the US to grow Disney+ subscriptions, it’s another thing to have to negotiate with Cineworld and AMC across their respective global footprints. From the words of AMC’s CFO in a recent conference call:

“Certainly, the studio world is consolidating and it’s a global business. And on our side of the camera, we’re seeing the same thing. And we’re global. Cineworld is global. And so I think it’s good that we’re – I don’t know if we’re matching it, but there is clearly scale to this business, your point about leverage with the studios.”

What does this mean for cinema viewers in Canada?

Tim Hortons is perhaps the best example of a foreign company acquiring a Canadian company and inserting a new management team that doesn’t understand the Canadian heritage and cultural impact of Tim Hortons. Cineplex doesn’t quite have the same Canadian-ness as Tim Hortons, but Cineworld would need to be careful in managing the film slate in Quebec, for example.

Cineworld will likely continue in-theatre upgrades such as recliners, but halt or sell investment in the Rec Room, Playdium, and Top Golf. Inside the theatre, movie and concession prices will probably go up (not that they haven’t already been), there will be faster rollouts of online reserved seating, and there may be a few more ads both before and after the show.

The initiative that will get the most press is the Unlimited subscription program which Cineworld expects to launch within 6 months. Apart from a paid enhanced SCENE program that Cineplex had been testing in Edmonton, Cineplex had generally been leery about the economics of subscription:

Question – Rob Goff: Could you convey your thoughts with respect to the potential for the subscription model perhaps online?

Answer – Ellis Jacob: Basically, as I mentioned before, we will continue to look at all of the opportunities that are out there and with our distribution partners decide what is in the best interest both from Cineplex perspective, the distributors perspective, and the consumer. So we will continue to review the situation, I’ve seen scene loyalty program provides great enough business for the guests to enjoy.

And we have to be careful, because some of those programs end up being a very low margin business. And as we’ve seen with movie buffs in the U.S., they’ve been able to sign up subscribers, but there are 2 million [subscribers] in a country of 330 million people and we are here with 9.1 million people in our SCENE program in the population of 36.5 million. So I feel that we have to be really careful as to what we introduce and we have a lot of offerings today for our guests that provide them with significant value.

The media will likely paint whatever program is launched as a Moviepass-like program, but similar launches by Cineworld in the UK and the US indicate that it is unlikely to look anything like Moviepass. For one, the programs are fairly pricey ($18 USD starting price for Regal Unlimited, and £18 in the UK). There are restrictions on which theatres you can visit and additional charges for premium formats. 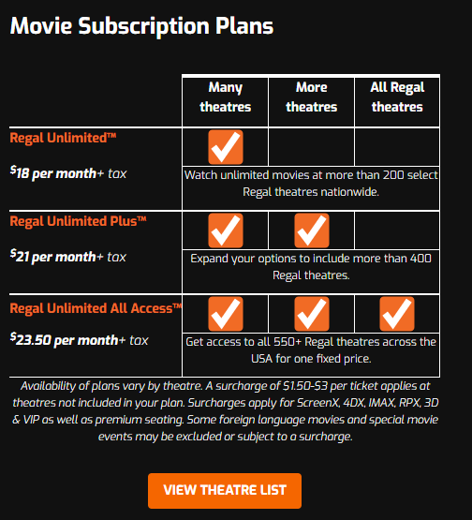 With the average Canadian watching around 2.5 movies per year, the Unlimited pass would be appealing only to an extremely small fringe of cinephiles who watch 2-3 movies a month and actually enjoy going to a theatre, rather than the guy who watches Avengers or Avatar every once in a while. Monthly passes are also too short to adequately incentivize traffic to the 2nd tier of movies since many people will game the pass by buying the pass only if there are enough movies they want to watch that month.

This is the biggest challenge to my thesis – that the theatre industry should transition to subscription passes, since the expensive pricing necessary to maintain even somewhat similar economics only further demonstrates the attractive value proposition of Netflix (which is something Netflix openly gloats about). Ultimately, the pricing power will only come if theatres can demonstrate a truly differentiated experience and consolidation will help both theatres and studios deliver one.

[i] As a reminder, Ellis Jacob (CEO of Cineplex) is the chairman of the National Association of Theatre Owners and understands the business very well. The proxy indicates Cineplex was insistent that a deal be made in cash, which should tell you what he thinks about the future of the theatrical distribution business

[ii] Despite this, Jacob understood very well that it’s total profit that matters, not margins. Under his leadership, Cineplex repeatedly made decisions that sacrifices margin to maximize dollar growth such as hiring more people to ensure there were no lineups for concession stands.