Thoughts on buying Chinese stocks and our circle of competence

One of the hot topics of the day among investors is the regulatory crackdown by the Chinese government and President Xi on various industries, most notably the for-profit tutoring and technology sectors. These issues have driven the benchmark MSCI China Index, which tracks a portfolio of internationally listed Chinese equities, down 13% year to date and over 27% from the high in mid-February with shares of major technology companies such as Alibaba, Tencent, and Didi down even more. 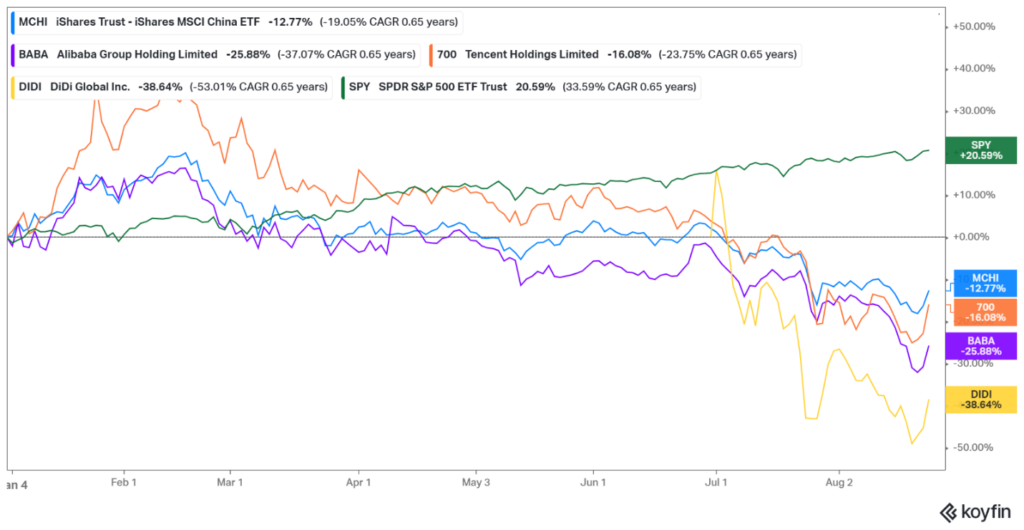 For years, investors have flocked to China due to the remarkable growth of the middle class as well as the technological innovations of the private sector. For example, Tencent’s WeChat is a model “super-app” that companies such as Facebook are attempting to emulate, while China’s payment system is among the most advanced in the world due to Alibaba’s Alipay. As such, many investors are wondering if the recent drawdown is a good opportunity to “buy the dip” on the major technology companies.

At Baskin Wealth Management, we have studied several companies in China before and while we admired their innovations and ubiquity of their products in the daily lives of the Chinese people, we decided not to invest in their shares for clients as we felt we did not adequately understand the business and political environment of operating in China. This is not unique to China, we also do not own any shares of African, Latin American, Middle Eastern, or Indian companies, though China’s one-party system that restricts free speech, private property rights and the free flow of capital presents additional analytical issues for potential investors.

As such, the securities we choose for client portfolios are overwhelmingly based in Canada or the United States, not because we don’t think there are good companies in other countries but simply because we lack the knowledge to understand the companies and the operating environment in most places around the world. A critical portion of our investment strategy at Baskin Wealth Management is that we will never invest in something that is beyond our capability to understand. Clients or other investors often ask us why we don’t invest in a certain stock or sector. The reason is simple: it is impossible to make a judgement on the attractiveness of a stock at a given price without the knowledge to evaluate the situation.

As an example, take Tencent Holdings: the bull thesis is that after backing out Tencent’s massive investment portfolio which includes stakes in Spotify and Epic Games, the remaining “core” business including their Chinese games business and WeChat are valued at an attractive multiple relative to major US tech companies such as Google and Facebook. However, the reason Tencent shares are trading at this level is due to the perception that regulation by the Chinese government will impact profitability in the future. This perception exists not just because of a stock market narrative that just randomly formed (which does happen) but because of actions and statements (such as calling video games “spiritual opium”) made by the Chinese government which could and have impacted Tencent’s profitability. For example, after President Xi called for “common prosperity” for the Chinese people, Tencent announced a ¥ 100 billion “donation” (over $15 billion USD) to aid the government’s wealth redistribution efforts.

It is entirely possible that the market’s fears are overblown but the key point is that without properly understanding the motivations of the Chinese government, there is no basis upon which we can make a judgement as to whether the market is overreacting to the present concerns or whether the shares are attractive at current prices. An investor that has studied and understands the Chinese political system is in a much better position to make these kinds of trades. However, even for experts in the Chinese market the uncertainties inherent in investing in a country with an overtly Communist totalitarian dictatorship are daunting.

Beyond China, staying within our circle of competence also has practical implications with portfolio management. We are naturally more familiar with existing names in the portfolio than new ones, and the knowledge that is accumulated from tracking a company’s evolution over time gives us comfort in the management’s abilities as well as the company’s competitive position. This knowledge is difficult to replicate with a new and unfamiliar name, and we are content to sacrifice potential upside from a newer, “sexier” name for the peace of mind that comes from owning something that we truly understand. This doesn’t mean we aren’t constantly trying to learn more and find new ideas, but we believe our approach helps prevent costly unforced errors and allows us to focus on company fundamentals.