Thoughts on TFI International and the acquisition of UPS Freight

TFI International (formerly known as Transforce) is a gritty business that doesn’t capture the imagination of r/wallstreetbets, but through skillful operations and capital allocation has delivered very healthy returns to shareholders over time: a $1 investment when current CEO Alain Bedard took over in 1996 is now worth over $200 vs about $2.70 for the S&P/TSX index. 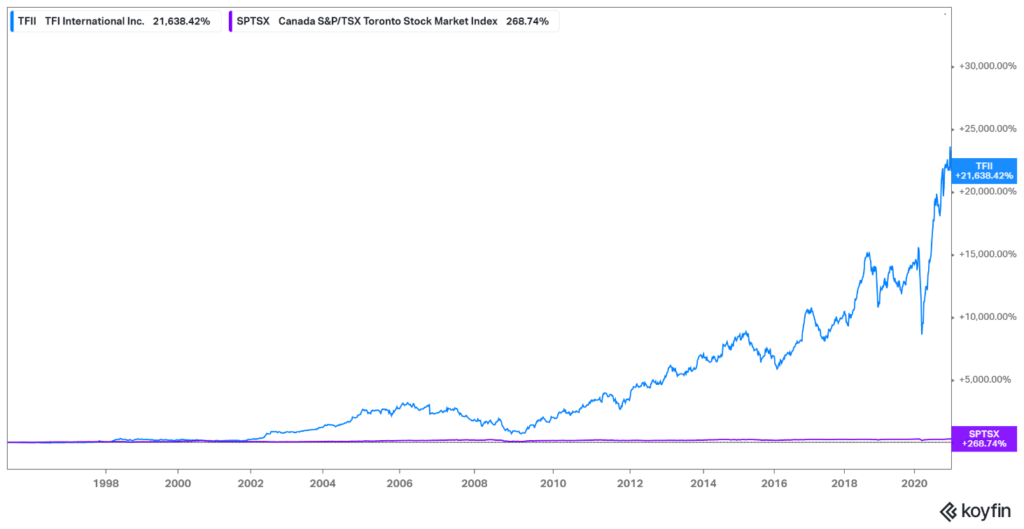 As a side note, TFI completed a listing on the New York Stock Exchange in February 2020 partly due to the valuation gap between itself and US peers, and subsequently obtained a much higher valuation after the pandemic. Perhaps we will see more Canadian companies with large US operations try this going forward.

Over time, TFI has acquired a large portfolio of trucking businesses servicing a diverse range of end markets, from courier services, to last-mile e-commerce, to forest products and building materials, making TFI less cyclical and sensitive to economic swings than other pure-play carriers. The key is that TFI does deals to make money, not simply to grow. Acquisition returns are benchmarked relative to its own stock price for buybacks, and TFI has been willing to sell businesses if it gets a high enough price, such as the sale of its waste management business to GFL for 10x EBITDA in 2015 (a high valuation at the time).

To manage all the individual quirks of the end markets, TFI’s business units operate in a decentralized manner with a key focus on profitability than revenue growth. The management of business units are compensated on profitability targets after capital charges for equipment and working capital, which incentivizes the leadership to reduce capital intensity by using independent contractors and brokerage instead of owning trucks. This has allowed TFI to generate positive free cash flow throughout the business cycle.

There is a clear focus on operating discipline and margins. Bedard is fond of telling TFI investors that it would be preferable to owning Scotiabank stock and get a 3% dividend as opposed to earning a 3% margin. TFI applies this mindset to acquisitions and improves returns on capital by raising prices, shedding unprofitable freight, and selling assets and consolidating real estate. This will be the same playbook that TFI brings to UPS Freight, and it is why the market is so enthusiastic about the deal, sending TFI’s stock up 40% in the two days after the announcement.

UPS Freight and the US LTL Market

On the morning of Jan 25, TFI announced the acquisition of UPS Freight for $800m USD. TFI is one of the largest LTL (Less-Than-Truckload) carriers in Canada, and has long sought for ways to enter the attractive US LTL market, first acquiring DLS Worldwide (an LTL logistics company) in October 2020 before acquiring UPS Freight. Unlike conventional truckload services which can be provided with any trucker with a commercial license, less-than-truckload services are a scale business that rely on network density, creating a high barrier to entry to the industry. Shares of pure-play US LTL companies like Old Dominion Freight Line and Saia trade at high premiums to other conventional truckload companies:

With the acquisition, TFI immediately becomes a major player in the US LTL Market. UPS Freight is the 5th largest LTL carrier in the US with 197 terminals, 5,400 tractors, and 14,500 employees generating US $3 billion in revenue.

For some background, UPS Freight was formerly known as Overnite Transportation Company. In 1986, Union Pacific acquired Overnite for $1.1 billion and spun it off in 2003 before UPS acquired it in 2005 for $1.25 billion and renamed it to UPS Freight. According to trucking news site Freightwaves.com, UPS CEO Carol Tomé as a Board member of UPS “observed UPS’ early struggles to integrate Overnite and the limited synergies that would accrue over the following decade and a half” and pushed to sell UPS Freight upon becoming CEO in March 2020. And UPS Freight certainly struggled: UPS Freight today is operating at essential break-even.

UPS CEO Tomé clearly wanted to move quickly. UPS is selling UPS Freight to TFI for a low multiple of 5.3x EBITDA pre-synergy, and UPS will be taking a $500m impairment charge on the sale while retaining responsibility for historical pension assets and liabilities.

Unlike Union Pacific and UPS, TFI will be managing this business not for its synergies to the existing business (although there will be many), but as a standalone profitable entity. Although TFI’s management believes there are opportunities to raise prices and shed unprofitable businesses, UPS Freight’s pricing does not seem too far off from ODFL and Saia’s pricing today which implies that the bulk of the opportunity will be in cost savings.

Despite a unionized workforce, there is good reason to be bullish on TFI’s ability to improve the cost structure. The Canadian LTL market largely services mall-based retail and despite facing structural declines, TFI has managed to grow profitability through pricing and cost cuts. The US LTL market is quite different and focuses more on industrial production leading to a more stable revenue and pricing environment. TFI believes that by investing in new trucks, raising prices, and cutting costs, it can achieve a 90% Operating Ratio (The % of operating costs relative to revenues) within 3 years and likely much lower beyond that. Even assuming some loss of revenue from price increases and additional capital, TFI could easily earn operating income of $270m to $300m on the initial purchase price of $800m plus $50m-$75m of incremental capital spending.

Longer-term, there are plenty of synergies that exist with TFI’s existing business as well: