What is next for Constellation Software?

If one were to ask an investor to name a Canadian compounder, odds are that the answer would be  Constellation Software. This reputation is well deserved: mainly through the acquisition of about 500 or so small vertical market software (VMS) companies, Constellation Software has compounded whatever metric you choose: EBITA, Free Cash Flow Available to Shareholders (FCFA2S), Adjusted Net Income on invested capital, all at about 30% per year. The stock price has done even better: a $1 investment in Constellation Software 10 years ago would be worth nearly $40 today, compared to only $1.30 for the TSX index. Compound growth truly is the 8th wonder of the world. 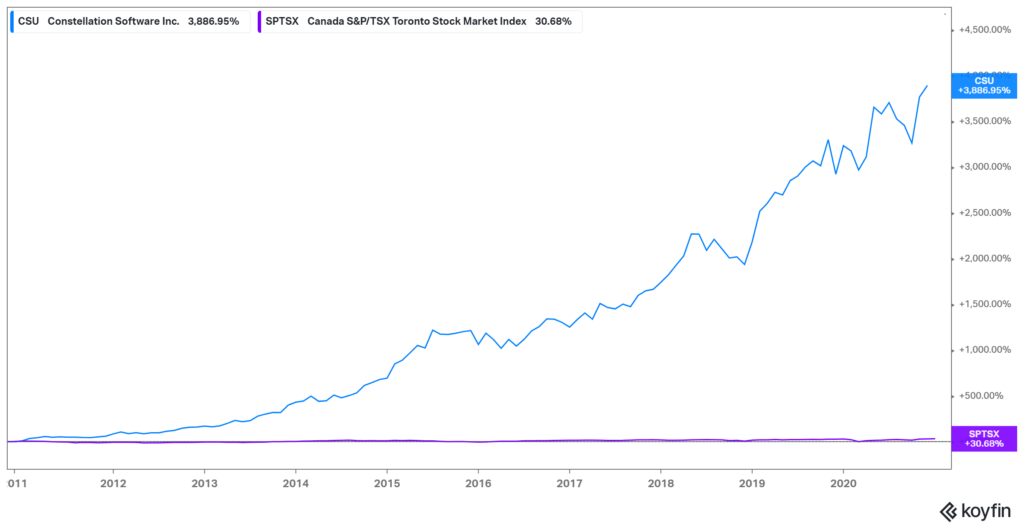 I won’t talk too much about Constellation’s core strategy here. There are plenty of good write-ups that cover Constellation Software’s founder Mark Leonard, the business model, acquisition strategy of vertical market software businesses (VMS), and organizational structure. Some good ones are here & here (paywall). On a high level though, Constellation Software is worth studying because of CEO Mark Leonard’s unorthodox views and strategies regarding financing, capital allocation, and managerial theory, and the company can be viewed as an experiment on how to optimize incentives within an organization. For example, Leonard has expressed his concern on the ethics of completing share buybacks, and believes they should only be done if the management has fully communicated that it believes the shares are undervalued. How many CEOs out there would even spend a second thinking about such a topic?

As Constellation continues to scale up, it will be fascinating to see how Leonard manages the company as it approaches the end of its core acquisition runway.

What is Constellation’s growth runway?

Constellation publicly says that its database of potential acquisition targets is around 40,000 VMS companies around the world. With its current target of 100 acquisitions per year, it would seem as though Constellation has a very long runway in front of it. It is worth pointing out that Constellation Software is a global business, and that a lot of the current market enthusiasm for technology companies is confined to the US. Since Constellation’s bread and butter acquisitions are profitable, established businesses that do not need to raise capital, the trick is more about sourcing and developing relationships with businesses as opposed to competing for the hottest deals on the market.

However, as Constellation grows it becomes exponentially harder to deploy capital and source and build relationships with potential targets. The numbers speak for themselves. Constellation earned about $600 million in free cash flow in 2019. Assuming Constellation can compound capital at 30% per year, Constellation would need to deploy $2.2 billion per year by 2024 and $8.2 billion in acquisitions in 2029. At an average deal size of $50 million, Constellation would need to make about 160 acquisitions, on average three every week, by 2029. Constellation could make larger deals but in large deals it is typically facing higher overall valuations (Leonard expressed distaste in 2017 at paying even 3.7x revenue for a VMS company!) and would need to compete against well-funded institutions and hedge funds running  private equity strategies. These players can sometimes apply up to 7x leverage to large target acquisitions, with the targets requiring more managerial attention. Other options like buying public market stocks would make it very hard for the company to meet its return goals, given the current market enthusiasm for software-related companies. Constellation has also talked about entering non-VMS verticals: the website gives a list of criteria that Constellation is looking for; however, to-date, I am not aware that Constellation Software has made any non-VMS acquisitions. 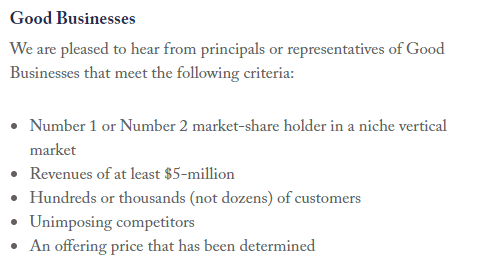 Shareholders can be reassured that CEO Mark Leonard is well aware of these eventual constraints and has spent a lot of time studying other “high-performance conglomerates” to try and glean lessons that can be used to scale Constellation Software for decades to come. From the 2015 President’s Letter:

“Constellation Software Inc. (“CSI”) is just entering its third decade. We study the HPCs because they help us understand what CSI does well, where we might improve, and what alternatives we could pursue. Keep in mind that we are comparing CSI to a group of wonderful companies. Over the last decade, if you had held an equally weighted portfolio of the shares of the HPCs, you would have more than doubled the performance of the S&P 500.”

Leonard has been firm that lowering hurdle rates for acquisitions can lead to negative consequences such as lower pricing discipline for acquisitions and less focus on improving processes at the acquired businesses and has articulated a preference to return capital to shareholders rather than make deals at lower rates of return. Nonetheless, there have been signs that Constellation is starting to rub against the edges of the wall in terms of being able to deploy all available cash flow into an ever-growing amount of small vertical market software companies every year.

For example, Constellation paid a special dividend in 2019 of $20 per share with as clear an explanation as you can get.  When asked why the dividend had been paid Leonard replied as follows:

The dividend is clearly a signal about capital deployment. If we thought that we could deploy this capital at high rates of return, we would have kept it.

Despite Leonard’s insistence on maintaining price discipline and high return standards for each new deal, Constellation Software has reduced its target hurdle rate down to the low 20s IRR for larger deals and has started using non-recourse financing to increase the returns for larger acquisitions though to-date only two deals have been completed using leverage: Total Specific Solutions in 2013 for €240 million and Acceo in 2018 for $250 million.

What does all this mean? Despite potential limits on growth, Constellation should be able to find creative ways to deploy capital at attractive rates of return going forward, even if on a consolidated basis, it is at a lower rate of return than historical. One of the hallmarks of a great management team is that they always find ways to surprise you on the upside, and we certainly expect this to be true of Mark Leonard and Constellation Software.

A bigger issue than the capital deployment runway is for Constellation to maintain its decentralized, entrepreneurial culture as it scales up. As Constellation gets larger, the complexity, number of employees and number of reports increases, potentially leading to organizational stress and road-blocks. Employees may see less of a relationship between their performance and the stock price, which is a big deal considering employees need to put a portion of their bonus into Constellation stock. Spin-offs are one way to help solve this problem, and the upcoming spinoff of Topicus.com will be an interesting experiment to see if it can improve focus. My next post will focus on that transaction.