Most everyone thinks that housing prices in Toronto are a bubble, waiting to burst. That makes the housing market’s resilience during COVID even more surprising: the MLS Home Price Index was up 7.7% in June with sales volumes back at prior year levels. 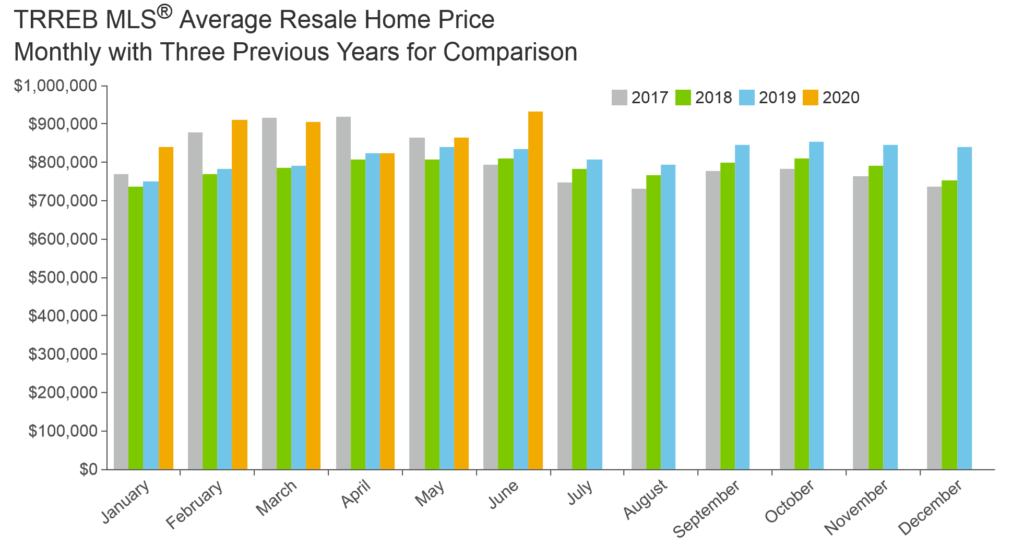 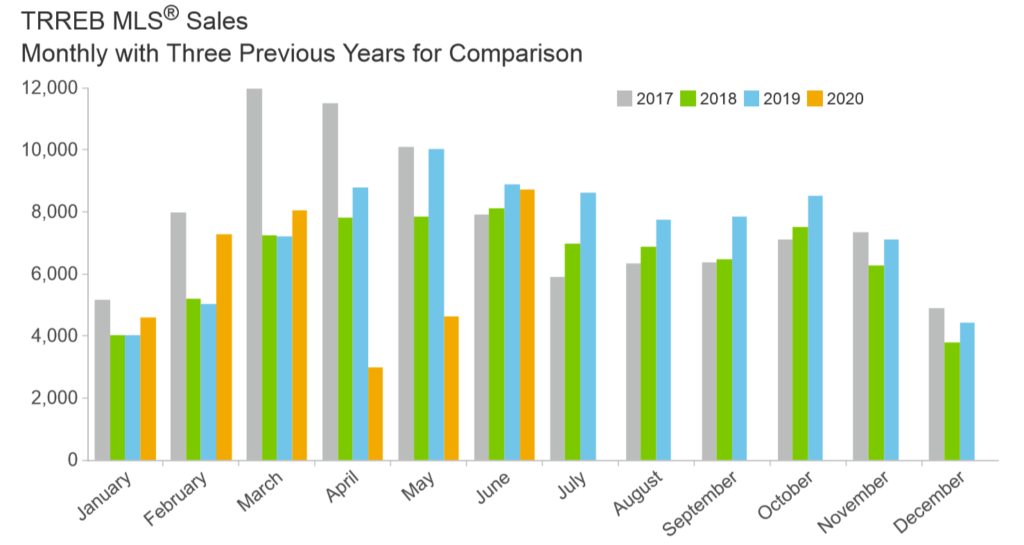 Predictions of a crash often arise from wishful thinking by people who are priced out of home ownership:The median household income in Toronto is $76,000 and with that middle of the road household having $1,000 in monthly credit card and car payments, Ratehub.ca tells me it can afford a home that costs about about $357,393. That doesn’t take you far in the GTA where new condos downtown start at $1,000 per square foot. However, as the people of Hong Kong will tell you, unaffordability itself is not a reason for home prices to fall. The driver of housing prices in the GTA over the last few decades is simply a story of strong demand from immigration confronting low supply as a result of a brutal regulatory regime, with falling mortgage rates throwing gas on the resulting fire.

Among OECD countries, Canada has one of the highest rates of immigration, welcoming over 300,000 immigrants per year. Contrary to popular perception, the vast majority (nearly 90%) of immigrants are either skilled economic immigrants or family reunification immigrants who are attracted to the stable political system and high quality of life offered in Canada. Given Canada’s aging population and low fertility rate, it is a good bet that government policy, whichever party is in charge, will continue to encourage immigration over the next few decades. In recent years, anti-immigration rhetoric and action from the United States federal government has led major technology companies, unable to bring in foreign workers on H1-B visas, to build new offices in Canada, creating well paid jobs and attracting highly educated and upper-worldly mobile families from around the world.

Not surprisingly, most immigrants to Canada choose to settle in Toronto, Vancouver or Montreal.[i] In 2019, Toronto’s population grew by over 120,000 people, making it the fastest growing city in North America, and this is before considering the growth in surrounding cities like Markham, Brampton, Hamilton, or even Waterloo.

Despite the strong population growth and ensuing demand for housing, Toronto has simply not kept pace in building homes for all the new people. This is primarily a failure of government policy: rent controls combined with overly restrictive zoning regulations have severely limited the growth in housing supply. Between 2011 and 2018, only 100,000 total residential units were completed even as Toronto’s population grew by over 400,000 people. Because of rent controls, only a small fraction of units have been built for rental since the 1970s, which has led to an increased reliance on condos to deliver rental units.  Apartment landlords in Toronto such as Canadian Apartment PREIT routinely get double-digit increases in rents on turnover.[ii]

# of Rental Units built by period through 2018

Similarly, approvals are so tough that a landowner can get material uplifts in value simply from slogging out the entitlement process for land.

“It will take some time to fully secure entitlements on these sites, but once we do, we expect material value and NAV creation to occur on rezoning alone. From there, we may look to monetize some of these densities through outright sales and in some cases, where we plan to develop, potentially selling our partial interest to partners.”

“We continue to be mildly frustrated with the length of time it’s taking to get entitlement done, but very encouraged of the value creation that lays ahead. We’ve got no real change of heart in terms of our ambitions to move forward. We’re really going as fast as we can, and it’s a slow process. However, it continues to unfortunately just express that supply problem that the market has in general. If we’re unable to do this with free land, it’s really not good news for the market in general in terms of delivering affordable supply.”

Combine high demand and low supply with low interest rates, and how can housing prices be anything but high?

How COVID changes this

To be sure, one can overpay even for the perfect property and there were certainly signs of frothiness in the GTA housing market even before COVID. For example, rental yields after condo fees earned by investors on condos were in the low single-digit range, implying investors were earning basically no excess cash flow after mortgage payments. A study by CIBC in 2017 found that 44% of GTA condo investors had negative cash flow on their “investment” property implying that owners were subsidizing affordable rents for their tenants. 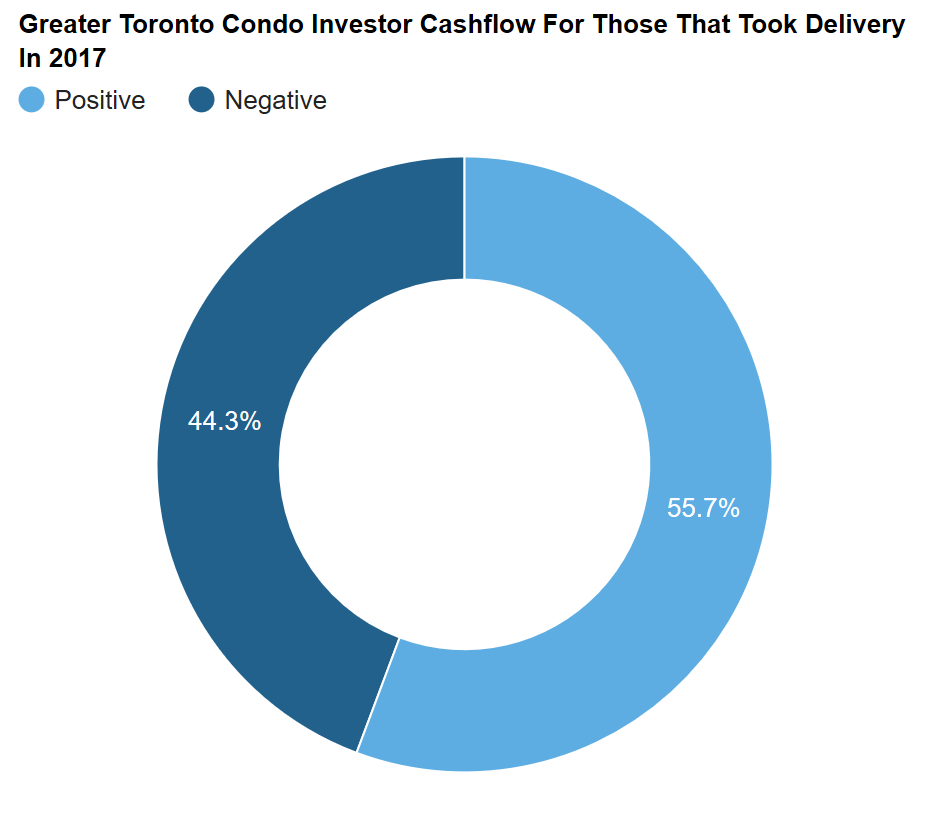 COVID will exacerbate this. According to Urbanation, condo rents have fallen 5.7% year-over-year. Demand has fallen as young people and students setting up their first homes have lost their jobs  and been forced to move back home with their parents, while listings surged as the pandemic reduced demand for short-term Airbnb rentals, causing some non-resident owners to retreat from the market. Many of these investors require the cash flow to cover their mortgage payments and it is unclear how many of these investors will be forced to sell once the government stimulus and mortgage deferral periods end: the CMHC reported that 21% of insured mortgages in Ontario are in deferral and currently 3.3m Ontario residents are receiving CERB. This is before considering the 78,000 condo units under construction which will need to be rented out and financed by the owners when they reach completion. Already, we are seeing signs that the condo market has cooled with median condo prices falling by 10% in April, albeit with limited transaction data.

What does this mean from an investment perspective?

The 2008 housing crash briefly saw real estate prices fall by 50%.  I think such a scenario is highly unlikely this time. Despite vacancies being at a 5-year high, they are still extremely tight at around 2% in Toronto and still under 1% in the 905 region. The supply and demand situation has improved, but barely. Likewise, the mortgage market has been fairly disciplined in lending standards with subprime lenders originating mortgages at conservative 70% loan-to-value ratios and Big 6 banks being even more stringent. The government and regulators have also pledged to support the credit market throughout this crisis… a hint of this is when OFSI told banks to assume that mortgage deferrals were not evidence of delinquency from an accounting perspective. Nonetheless, a 15-20% correction (which would happen if rental yields went from 3.5% to 4.5% assuming rents were stable) would still be an unpleasant experience for investors who purchased two or three rental properties on the thesis that real estate never goes down.[iii] Caveat emptor.

[i] This happened to such an extent that the Canadian government created special programs to drive immigrants to other provinces and smaller communities.

[iii] Though still highly unaffordable for the $76,000 income family