A contrarian view on Canadian housing

Canadian housing prices have been on an undeniable tear over the last few years. Home affordability is a touchy subject, and everyone seems to have a strong opinion on the potential causes and implications. At Baskin, we try to perform our research as objectively as possible and to act upon our conclusions, no matter how unpopular they may be. Our singular goal is to make money for our clients, not to generate clicks to our website. We rely on 3rd party research not for its opinions, but to see if we missed anything important in our analysis.

The media and economists appear universally of the opinion that Canadian housing, particularly in the Greater Toronto Area, is an inflated bubble and a disaster waiting to happen. Some people even think that the situation will be worse than what happened in the US in 2008. There is plenty of anecdotal evidence and there are pictures showing run-down looking houses selling for expensive prices. The most common arguments for GTA housing being in a bubble are:

2) Home prices relative to income levels are at historic levels

To start, what exactly is a bubble? Merriam-Webster offers the following definitions: 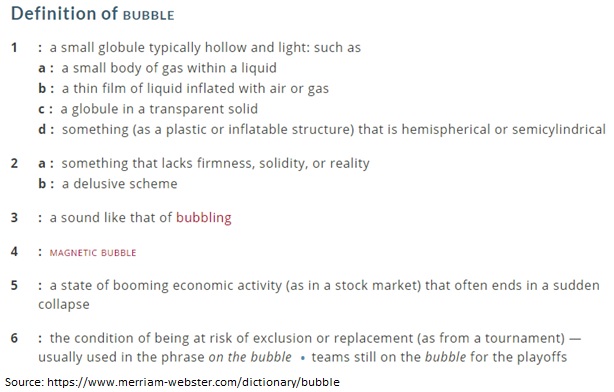 The 2nd and 5th definitions are of obvious relevance. Clearly Toronto housing has been “in a state of booming economic activity”. In 2016 the average GTA home price jumped 20%, with the average detached home price now at $1.21m as of March 2017. But does this necessarily mean it is “something that lacks firmness, solidity, or reality”?

Just because the price of something has risen does not necessarily mean that it’s in a bubble. Since 2009 Apple’s stock price is up over 700%, far outpacing GTA housing, but there are relatively few people who argue that Apple’s stock is in a bubble, simply because Apple has experienced strong growth over the same period of time.

However, housing is not like stocks. Housing is both an investment and a social good, since it provides people with the basic necessity of shelter. These two purposes conflict with each other, since as housing prices rise, homeowners experience a greater return on their investment while making it more expensive for those who are starting out, both on a rental or to-buy basis. It is socially desirable for people who want to have a house to be able to afford one, but on the other hand it seems fair that those who are both willing and able to pay more for desirable properties win out on the bids.

The most common explanation for why GTA housing is “unsustainable” is that it has risen beyond household income levels. Many economists state a relatively arbitrary figure of 3x gross household income as a reasonable benchmark for housing prices. The median home in Toronto is now priced at around 7-8x the median household wage.

Here are some housing prices for other cities around the world by comparison: 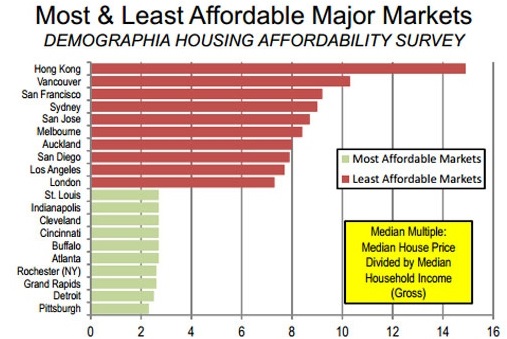 What this shows is that from an economics perspective, there is no particular reason why housing has to be affordable for the average person. Real estate in Hong Kong has been expensive since the handover in 1997, and continues to be exceptionally expensive. In desirable places where people want to live, it is natural that good real estate is expensive. Short-sellers frequently counter that Toronto is not a world-class city, like London, Tokyo, or New York, in which case I would suggest that they just come here and visit the city, which is consistently ranked as one of the best cities in the world to live. I don’t see Detroit on any of the “best places to live” lists.

The most common way to view housing as an asset class is the “cap rate”, or the net operating income of a property divided by the property value. For the GTA, cap rates for residential properties are within the range of 3.5%-4.75% as per Colliers, while globalpropertyguide.com shows Toronto condos to yield between 3-5%, depending on the location. The “fair” return on an investment in a rental property (or any other asset class for that matter) depends on the level of interest rates. Since 1990, the spread between the cap rate and the 10-year Government of Canada bond has fluctuated between 2%-4%, and have not tightened in recent years despite rising home prices. 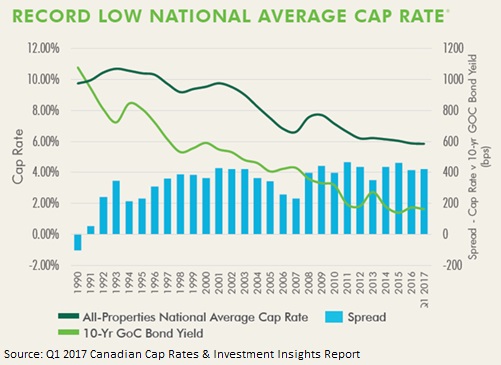 In the GTA, rising home prices seem truly to be a function of the lack of supply rather than because of speculation or foreign buyers. There is a severe lack of supply based on interest for buying a house with inventory in Feb 2017 now below one month, while sales activity is slightly higher than historical levels: 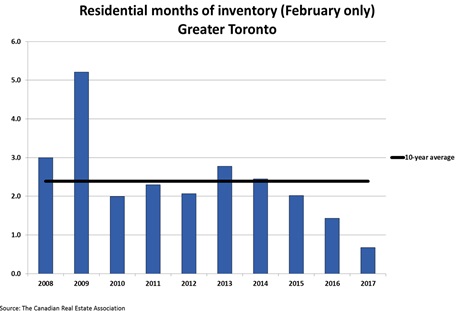 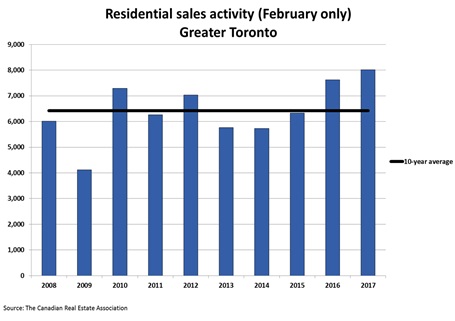 There are not many officially reported statistics for foreign buyers or speculation statistics, but a holistic view at the multitude of evidence shows both the level of foreign buyers in the GTA to be low, and the home vacancy rate to be low as well. Thus, home affordability may be a social issue, but that does not necessarily mean the high housing prices are in a bubble. Low interest rates, lack of housing supply, and Toronto being a desirable place to live all provide fundamental support for a high housing price level.

The next common argument is that Canadian debt is at record highs. Again this is true: 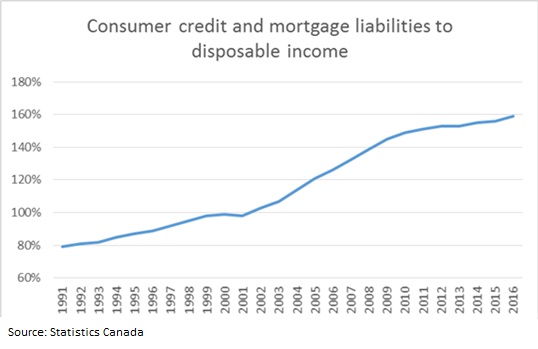 The amount of debt Canadians have relative to income has risen in a straight line since 1991 and is at a record high. However despite the increased debt load, Canadians are only about 2% less able to service this debt than in the 1990s. This is because interest rates have fallen from about 13%-14% in 1991 to below 1% throughout the same period of time. 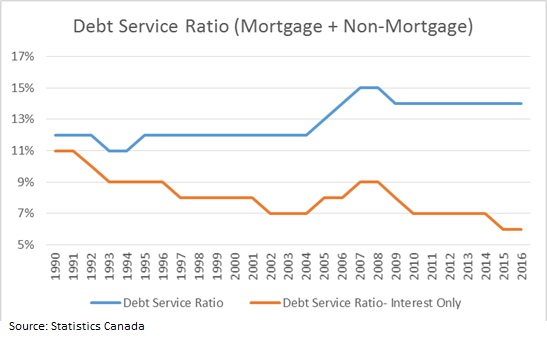 Again, it is entirely consistent that people and businesses are going to borrow more money if they can pay a lower rate of interest. After all, isn’t the entire purpose of low interest rates to stimulate borrowing and spur investment?

Canadians have also gotten richer. In fact, Canadians have decreased borrowings relative to changes in their net worth over the last 5 years…. 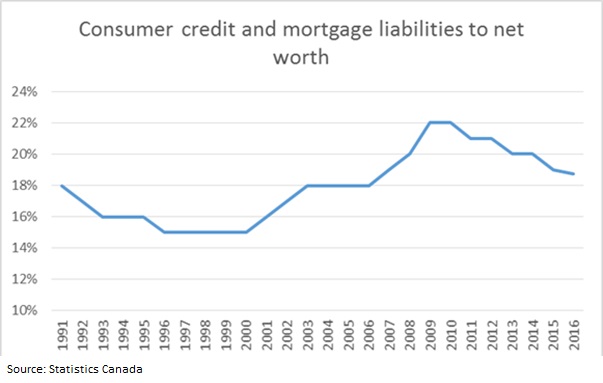 …and Canadians are also not borrowing an increasing amount of money relative to home prices. By contrast, the US ratio prior to the financial crisis was in the high 50s. 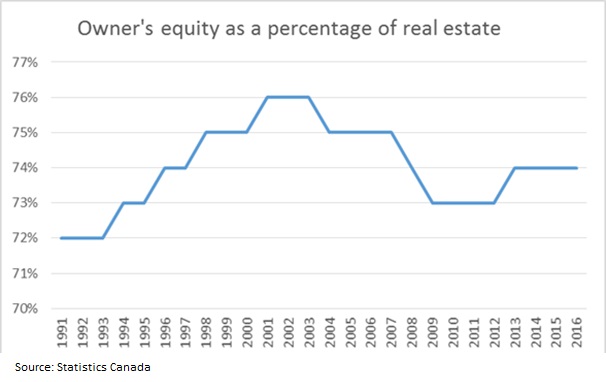 This is supported by a review of the annual reports of major Canadian banks. Most banks are originating uninsured loans at less than 70% loan-to-value ratios, giving themselves plenty of buffer room while banks like Countrywide Financial in the US were making loans at above >100% before the financial crisis. Furthermore, US homeowners are allowed to simply hand in the keys to their home to default on their mortgages, while Canadians cannot do this. As a result, it seems unlikely that a Canadian housing crash would be anything near as bad as a 2008-style crash.

So what will happen if interest rates rise? Cap rates will likely rise, leading to lower property prices. People will have to re-finance their mortgages on less favorable rates and some people will be unable to pay, further leading to lower housing prices. But this is not unique to the housing market. The prices of most asset classes should fall if interest rates begin to rise, and individuals, companies, and governments that are more heavily levered will be impacted negatively. Many people argue that the current era of low interest rates is creating artificially high prices across all asset classes with severe consequences when interest rates begin to rise. But this is a topic for another time.

So what does this all mean? Housing prices are expensive not because housing itself is in a bubble, but because all asset classes are expensive. Housing prices might still fall 20% or 30% perhaps due to government intervention, but the evidence shows that despite being increasingly unaffordable for new home buyers, the current expensive housing prices are rational, and should be expected in the low interest rate environment. Canadians are also taking on record amounts of debt, but again, with interest rates so low, their ability to service the debt has remained unchanged.

Until rates rise materially, I would not count on being able to buy a detached house in Forest Hill for $500,000 for the foreseeable future.