To be blunt, Europe is a mess. It is difficult to read through any of the morning papers these days and not feel pessimistic. Not only has the market fell victim to headline-driven volatility, the stories behind each one illustrates a gloomy outlook for the region.

The credit market has sharply sold off sovereign debt throughout the region, thus driving up the cost of borrowing for many European governments. The immediate response has been for policymakers to pursue austerity programs. However, along with government cutbacks come fewer public sector jobs, higher unemployment, less consumer spending, and higher costs to administer the notoriously generous European social safety net.

Until now, the debt crisis was the major problem plaguing Europe. This month, data has emerged that highlights the possibility of a pending recession in the region.

On Monday, the European Union’s statistics office, Eurostat, reported that industrial production fell by 2.0% in the 17-member euro area between August and September 2011. This represents the largest drop since February 2009. While industrial production still rose 2.2% year-over-year, this was the weakest gain in nearly two years.

On Tuesday, Eurostat reported that GDP rose 0.2% quarter-over-quarter (this compares to 0.6% in the United States and 1.5% in Japan). Based on eurozone surveys that suggest a manufacturing contraction took place in October, many economists now forecast a decline in GDP for the remaining quarter of this year. Because it takes only two consecutive GDP contractions to constitute a recession, what repercussions would North America face with a contracting European economy? 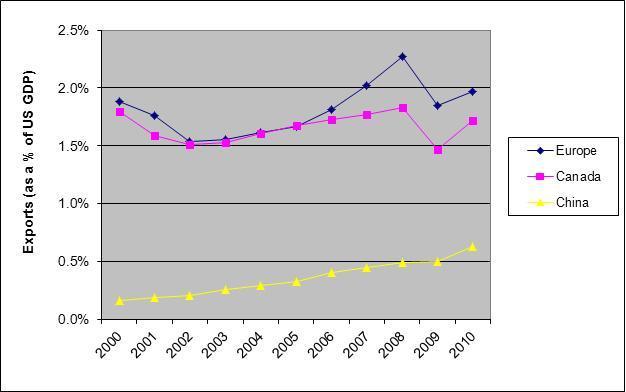 While America is not immune to a European recession, its impact would be marginal. Though it is true that American banks do hold sovereign debt on their balance sheet, the figure reported to Congress last month was $640B. This represents only 5% of total American bank assets. While larger summations of German and France bonds are held, both those countries hold prime AAA credit ratings, suggesting their highest possible credit-worthiness.

Overall, markets continue to trade off newspaper headlines from Europe. However, the disconnect between an inexpensive stock market and the strongest ever corporate earnings on the S&P 500 this year accompanies two observations. First, America is only marginally vulnerable to a European recession. Second, investors can use this environment as an opportunity to buy stocks cheap. Recall that Warren Buffett (who invested $23.9B last quarter, the most in 15 years) has said time and again to “be greedy when others are fearful and fearful when others are greedy.”