On Tuesday, our Associate Trader Ryan Thomas and I journeyed to Brampton, ON to visit the Amazon Fulfillment Centre YYZ4, one of nine fulfillment centers in Canada and the only one open to the public. Field trips are always informative because this is the real world at work; when you stare at a spreadsheet all day long, it can be easy to forget that stocks represent actual people running and working in businesses and making operational decisions. It’s one thing to read The Everything Store about Amazon’s advanced fulfillment capabilities; seeing it in person gives it a whole new level of meaning.

We arrived half an hour early and were told by the security that we had to wait outside – giving us an early indication of how regimented they are. At 11:30, a dozen of us were escorted inside the security gates and given headsets so we could hear the tour guide speak over the sound of the conveyor belts. It was around the same time that the employee break ended, so we had to wait for several hundred people to pass by during which our tour guide emphasized several times that Amazon treats its employees as full-time employees, providing them with health and education benefits.

Our first stop was the inventory storage, which looks nothing like a typical distribution center with the forklifts and floor-to-ceiling racks that you might see at Home Depot or Costco. Instead, dozens of Kiva Robots roamed around in an enclosed area separated from humans and brought shelves of items over to employees to pick up for ordering. From there, we followed the orders down the massive conveyor belt and chute system to be packaged, verified, and prepared for shipping. The system we saw was designed to handle small items such as headsets or a pack of socks; larger goods such as furniture or TVs would need to be handled in another section of the facility that we did not get to see.

Although Amazon has hundreds of employees in the facility, virtually none of the work requires human judgement. The whole process is optimized for speed using computers, including the way that inventory is allocated on the shelves in an optimized manner to minimize travel time for the item picker. The system sorts the goods, decides what box should be used, spits out the correct amount of tape, verifies the product using scales and weights, stamps the shipping label, and directs the order to the right shipment dock. The whole process is seamless and highly efficient; humans are there simply because of our ability to do tasks that a robot can’t yet do as efficiently, such as folding different sizes of boxes. The system also tracks employee productivity by the second on the screen and occasionally tells employees to take a 30 second break while guiding them toward simple stretches and breathing exercises. It’s not hard to fathom a time in the near future where humans are removed from the process entirely.

In the end, after taking pictures at a designated photo booth (photography is strictly forbidden), we were given souvenir water bottles before being led out of the building.

Although it would be silly to draw too many conclusions simply from one site visit, the tour really showed just how meticulous Amazon is in designing every aspect of its business. Amazon does not merely have better robots or software than its competitors; even the smallest step in the process such as the amount of Amazon Prime Tape to wrap a box is carefully planned. We all marvel at the ease and speed at which we can buy and receive items on Amazon.ca, and being able to see how it works in action helps you appreciate just how much effort and investment goes into being able to deliver that new pair of headphones within two days. 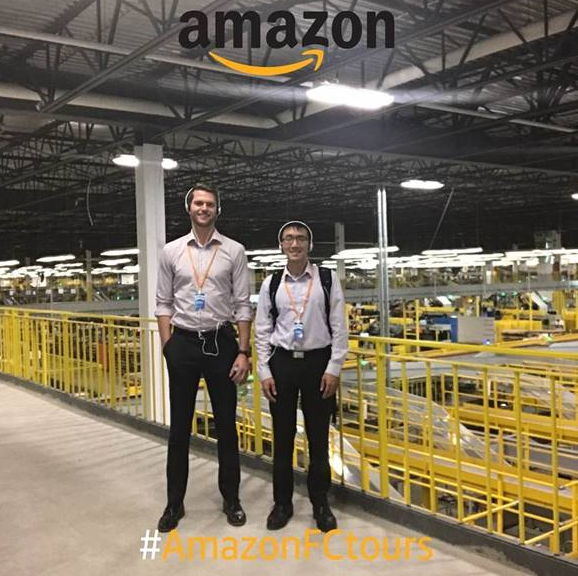