If your house is like my house, you have a box of ear swabs that you use regularly for their intended purpose, cleaning your ears. But if you read the fine print on the box, you will find a warning. You are told that you must not put this product in your ear, that it is dangerous to do so, and whatever made you think to call cotton swabs “ear swabs” anyway?

This may be the 2nd most commonly ignored warning. The most often ignored one is the disclaimer that comes with all investment products. “Warning!”, it says, “past results are not predictive of future results”. Just like people cannot resist sticking cotton swabs into their ears, people cannot stop looking at the past to project the future. This turns out to be a whole lot more dangerous than using ear swabs but people keep doing it anyway.

Recently the price of crude oil hit a ten year high at $129 per barrel. Unsurprisingly, trading volume in oil stocks more or less tripled. For example, Canadian Natural Resources, which normally trades around 3 or 4 million shares a day saw volume of over 13 million shares on each of the last three days. People who missed out on the oil run-up don’t want to be left behind, and are piling into the trade. This usually does not work out very well. Here are some other recent examples of “investors” chasing the past.

When Canada’s Federal government legalized recreational use of cannabis in the summer of 2018, interest in an Exchange Traded Fund that tracked publicly traded pot stocks peaked, as you can see by the black column below that indicates monthly trading volume. There was a huge influx of money into the new industry at around $21 per unit, which turned out to be just about the top of the market. Discount brokers had to hire extra staff to take orders to buy cannabis stocks.  Over time, it turned out that like the pot itself, investors’ hopes turned to ashes. The ETF has fallen over 75% since its glory days. Chasing the hot new product was a bust. Now that the ETF is cheap, you can see that the volume has fallen to very low levels. 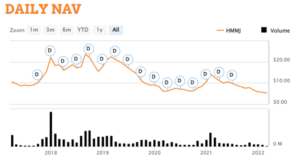 GETTING ALL THE UNICORNS INTO THE ARK

Cathie Wood is an evangelist for the tech industry. She was an avid proponent of many early-stage companies that made a splash by going public in the last two years. Many of these were so-called “unicorns”, private companies valued at over $1 billion.  Her flagship exchange traded fund, ARK Innovation ETF had an eye-popping return of 152% in 2020. Money flowed into the fund in torrents, reaching levels of $3 billion per month of new investment in early 2021. This turns out to be just about the point at which ARK hit the top of its arc, with a value of around $157 per unit. Today it is trading at around $54, or about one-third of that price. Much more money has been lost by the many ARK investors who bought at the peak in early 2021, than was made by the relatively few early investors in prior years. 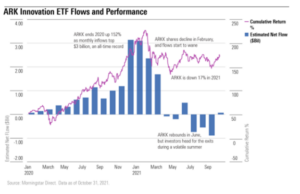 ZOOMING TO THE BOTTOM

In the early days of the pandemic, like so many other firms, we started using Zoom to talk with our clients. Many were intrigued by this technology that made video conferencing easy and routine, and asked why we did not own the stock. Zoom Video Communications stock had traded with lackluster volume and progress at around $65 per share prior to the arrival of COVID. Suddenly there was a huge up-tick in interest (obviously our clients were not the only ones interested) and the stock soared to a high of $588 per share in October of 2020 on volume that was eight times higher than it had been in 2019. At the top, the stock was trading at unsustainable multiples of revenue and earnings. It has since fallen about 82% and is now under $100. It is very safe to say that much more money was lost on the zoom to the bottom than was made on the ride to the top. 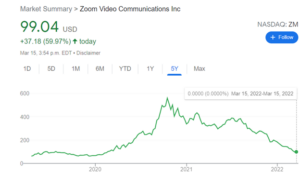 It would be nice if the past could predict the future; it would make investing much easier. In fact, some parts of the past are helpful. Looking at growth in earnings and revenues, looking at how companies change their competitive position, and how they manage their expenses – these fundamental financial indicators do have predictive value. Well managed companies tend to stay well managed. Firms with a competitive advantage tend to keep that advantage over time. But that kind of analysis is hard work, certainly much harder than thinking “oil prices are going up, let’s buy some oil stocks”. As Daniel Kahneman said:

“A general “law of least effort” applies to cognitive as well as physical
exertion. The law asserts that if there are several ways of achieving the
same goal, people will eventually gravitate to the least demanding course
of action. Laziness is built deep into our nature.”
― Daniel Kahneman, Thinking, Fast and Slow

The last two years have made it easier to separate out the managers who are good at resisting the temptation to go after the quick buck from the ones who are in it for the short run, measuring their holding period in days rather than years. Did you chase Zoom? Did you dash into Door Dash? Did you buy Shopify at $2,200 when it was the most valuable company in Canada (now about 1/3rd the price and the 10th most valuable)? If so, you were chasing the past and ignoring the warnings.