How Much is Enough? Part 2: Taxes and You

In the first instalment of this series we discussed how to budget projected expenses during retirement. This instalment will analyse the taxes a Canadian can be expected to pay throughout her or his retirement, and common strategies for tax minimization. 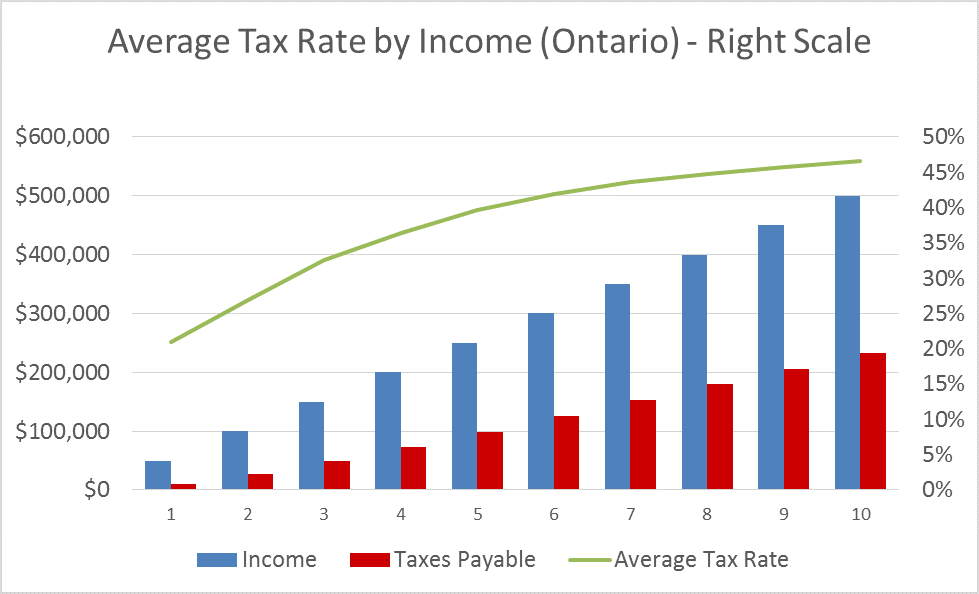 It will come as no surprise to most law-abiding Canadian citizens that there are precious few ways to avoid paying taxes entirely – though a certain Canadian tennis star has elected to become a resident of the Bahamas in order to pursue one such option. For the rest of us, here are three of the most common strategies a person can use in planning for, and minimizing, their future tax outlays: income splitting, tax deferral and tax credits.

Income splitting is one of the most powerful tools available to families in Canada to reduce the two spouses’ combined tax bill. Due to the progressive tax regime in Canada, by moving income from the higher-earning (and higher-taxed) spouse to the lower-earning spouse, the couple can pay a lower average tax rate, and thus reduce taxes overall. The two most common strategies are pension splitting and CPP splitting. Pension income can usually be split between spouses, including income from a Registered Retirement Income Fund (RRIF) at age 65 or older. Canada Pension Plan (CPP) can also be split, depending on how long the couple has been together, although Old Age Security (OAS) cannot be split. Other strategies for splitting income include:

–           Transferring capital losses to a spouse. When you sell a stock at a loss, you’re not able to claim the capital loss if you or a family member re-purchase the same stock within 30 days, which is called a “superficial loss”. Instead, the loss that would have been claimed on the old shares is added to the cost basis of the new shares, resulting in a lower capital gain when (if) the new shares are eventually sold at a profit. This can be used deliberately in order to move capital losses from a lower-earner to a higher-earner, for whom the losses are more valuable.

–           If you are self-employed, you can split income with your spouse and kids, as long as you pay them a “reasonable wage for services performed”. No $100K salaries for making coffee twice a week.

Tax deferral is another method for paying less tax. By utilizing registered investment plans like the Registered Retirement Savings Plan (RRSP), you can allow your investments to grow tax-free, before paying taxes on the withdrawn amount in the future. That way, you can make changes to your investments, such as selling a stock and buying another, without worrying about the capital gains tax reducing the value of your investment. As well, most (but not all) people stand to have lower incomes in retirement than they do during their working years, so they will be subject to a lower tax rate. By avoiding taxes during their working years when their income is high, and paying them later when their income is lower, they can pay fewer tax dollars overall.

Tax credits are the third method, and an important one for tax minimization. There are too many tax credits to describe them all in detail: pension tax credit, disability tax credit, Canada Child Benefit, tuition and textbook credit, et cetera. Furthermore, many of these are only available to a small number of Canadians, based on things like income and disability status (for themselves or as a caregiver). But one interesting tax credit is known as the age exemption. TurboTax has a great article explaining it here. Essentially, if you’re 65 or older, a Canadian resident, and have income less than about $82,000, you get a tax credit that gets smaller as your income approaches the income threshold. For some people, particularly relatively early retirees who haven’t yet begun taking CPP or OAS payments and thus don’t have required RRIF withdrawals, proper management of the age exemption can result in tax credits with significant value.

Now that we have discussed the various ways to minimize your tax outlays and investigated one of the two certainties in life, the next column will deal with the other. We’ll discuss considerations around how long you, your spouse, or both of you may live.