Looking at Snapchat through the Baskin lens

There has been plenty of media buzz around Snap’s proposed Initial Public Offering (IPO). Snap is the owner of the popular computer app “Snapchat”, much loved by teenagers. At an estimated $25 billion valuation, this would be the largest US IPO since Facebook in 2012. Through the last 10 years there have certainly been technology company IPOs that have performed spectacularly, most notably Facebook. It can be exciting to participate in the latest trends and new technologies. At Baskin Wealth, we too own shares of tech companies that we expect to continue to be “trend-setters” tomorrow including Apple, Google, Priceline, and Microsoft. Could Snap be the next one?

Before we start talking about Snap in particular, it’s worth pointing out that IPOs tend to be structurally poor investments as a group. An IPO takes place when a company’s founders and early-stage investors decide to sell shares to the public. Obviously the owners have more information about the prospects of the company than prospective investors, and are in the best position to know when the shares are cheap or expensive. As such, insiders are most likely to complete an IPO when they feel they are getting a good price for their shares. Logically this means that the IPO buyer is often likely to be paying an expensive price.

Snap’s key product is Snapchat. Snapchat is essentially a mobile chat service that allows users to send photos and videos (known as Snaps) quickly to friends. Snaps can be decorated with pictures known as “lens”. Snaps self-delete after 10 seconds so each snap feels authentic, and snaps are deleted even on Snapchat servers. It is especially popular among teenagers and youth who don’t need to worry about having a permanent photo record of their dumb moments.  Snapchat is used by 64% of young adults (under the age of 24) but only 8% of those over 35.

For a four year old company, Snap has accomplished tremendous growth, which shows little sign of ending. There is no doubt that Snapchat has become a cultural phenomenon, at least among the youth.  There are currently about 161 million daily users of Snapchat, of whom 42% are in North America. 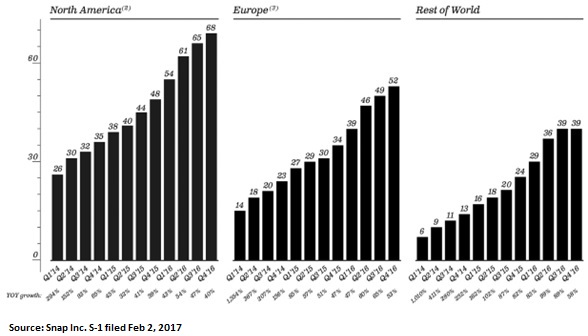 Snapchat’s users are loyal almost to the point of obsession. The average Snapchat user opens the app over 18 times per day and spend 25-30 minutes on Snapchat.

Snap is currently unprofitable by any measure. This is not surprising since Snap’s focus has purely been on creating a fun and interactive experience for users, and on growing the number of users. Snap did not even sell its first ad till mid-2014. Snap is just getting started with the monetization. In North America, average revenue per user (ARPU) has increased from just $0.10 in early 2015 to a recent $2.15 per user per quarter. By contrast, Facebook currently earns about $15 in revenue per active user in North America, and both LinkedIn and Twitter earn about $6. Given Snap’s relatively unobtrusive advertising model, there seems to be little reason why Snap cannot reach an ARPU similar to LinkedIn and Twitter’s level. For this reason, arguments about the value of the company should properly focus on the likely future revenue rather than the current low level.

If Snap can get to 100 million active users in each of North America and Europe, with 50 million users in the rest of the world, it is conceivable that Snap could earn revenues of over $6 billion, with an APRU of $7.50 in North America and less around the world. Assuming an adjusted margin of 30% which is better than LinkedIn but not as good as Facebook, it is not too difficult to imagine a scenario where Snap’s $25b valuation can be justified. 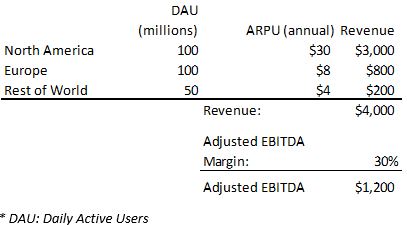 When a mobile app has a loyal and engaged user base, there seems to be no limit to how integrated it can become in its user’s lives. For example, more people watched the 2016 Video Music Awards through Snapchat than on traditional cable TV. If Snapchat is able to replace TV, even if only with users under the age of 25, the $25b valuation could look inexpensive. This is how Marc Andreessen of venture capital firm Andreessen Horowitz puts it in an interview with the Wall Street Journal: 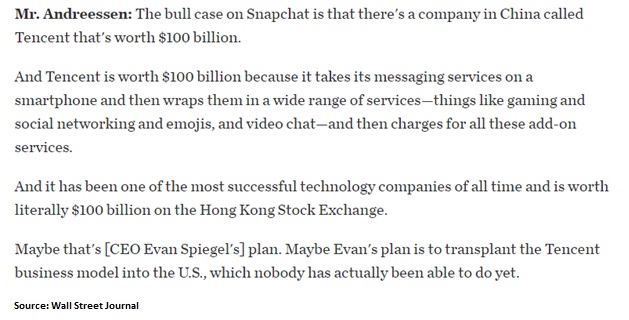 On the other hand, it is very possible that Snapchat will struggle to successfully monetize its users. Tech companies frequently spend aggressively in anticipation of future growth, and if the monetization efforts fail, Snap would end up looking like the next Twitter, Tumblr, or any of the various other once-popular social media sites. Snap has structured its shares such that co-founders Evan Spiegel and Robert Murphy control all of the voting rights, so they cannot be removed by their new investors even if the strategy is not working. In short, it is almost impossible to know whether Snap shares will perform more like shares of Facebook, a huge winner, or like those of Twitter, which have been a huge disappointment to early investors.

Long-term clients of Baskin Wealth know that we pick stocks using a very particular style that we believe provides solid long-term returns for clients. We try to find stable companies that generate substantial free cash flows, pay dividends, and are run by shareholder-friendly and intelligent management teams. Shareholder-friendly means that the management and Board of Directors are properly aligned with public shareholders, and recognizes that they are employees of the shareholders.

We have already seen that Snap proposes to give its new public shareholders no voting rights, leaving shareholders with no ability to change the direction of the company if things aren’t going well. This also leaves the public shareholders vulnerable to abuse with no recourse. For example, Snap agreed to pay Evan Spiegel an additional 3% of the company equity as a bonus for taking the company public and “motivate him to continue growing the business”. Spiegel is going to own $5b in Snapchat stock as a result of the IPO, so why would he need any additional incentives to run the company well? The class structure ensures that the Board and insiders can get preferential treatment over other shareholders.

Given the extremely wide-range of possible outcomes as well as the unfavorable positioning of minority shareholders, Snap shares seem much more like a gamble than a true investment. We will be sitting on the sidelines for the Snap IPO.