Mediocre can be good for your portfolio

You can’t have nice times in the market for very long. After a terrific four months at the start of the year, the market is on high alert once again.

The market rallied until the beginning of May for good reasons. Recession fears faded away. North American central banks announced they were finished raising rates for a while. Brexit was kicked down the road until the end of the year. First quarter corporate earnings came in better than expected. Perhaps most importantly, it appeared that the U.S. and China were close to a deal to end their year-long trade dispute.

With the U.S./China trade dispute back in the headlines, stock market investors have been punished across the board in May. Although it appears that the North American economy is still in expansion, growth has slowed markedly.  However, all is not lost.  Both the Bank of Canada and the Federal Reserve are still on hold indefinitely and may even look to cut interest rates at some point if conditions worsen. Earnings in the first quarter were stronger than expected, but a protracted trade dispute could dampen even the most optimistic outlook.

All sounds pretty mediocre right? Actually, mediocre can be good for your portfolio.

Look at the chart below. Since 1927, the stock market has performed best when earnings per share were 10-25% lower than they were the previous year. Perhaps this seems counterintuitive. However, if earnings grow too quickly, it indicates that the economy is doing too well and that, at some point, interest rates will rise to prevent over-heating. If you can be compensated with high interest rates for taking on less risk, you will certainly need less stock market exposure to achieve a reasonable rate of return. If earnings are slowing and the economy is stagnating, there is no reason for interest rates to go higher and, as a result, you will have to own more in stocks to achieve your desired rate of return.

We hope that the U.S. and China trade dispute ends soon. But if history is any guide, the uncertainty that it is creating may not be that bad for your portfolio. 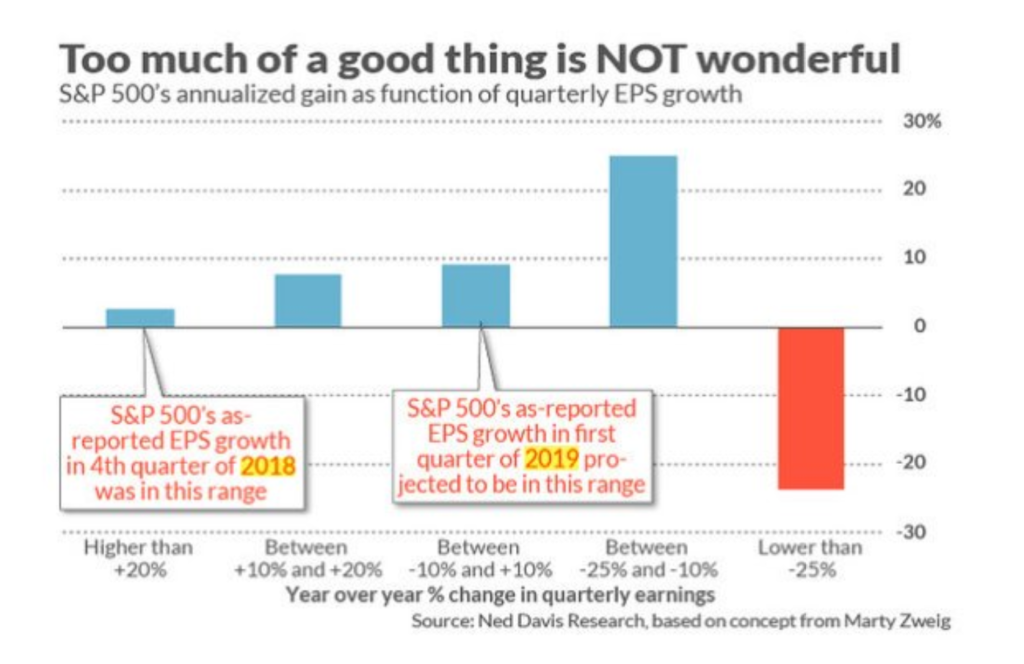