Oh Canada. Why is your Stock market so bad?

That’s a big difference over a significant period of time. It is also a complete turnaround from the period of 2001 to 2007.  In that span the TSX was the big winner, doubling in value while the S&P went up about 50%.  What happened? Why has Canada underperformed so badly? The answer, in a nutshell, is that technology did well and commodities did badly. Here is a graph of the world commodity index over the past ten years: 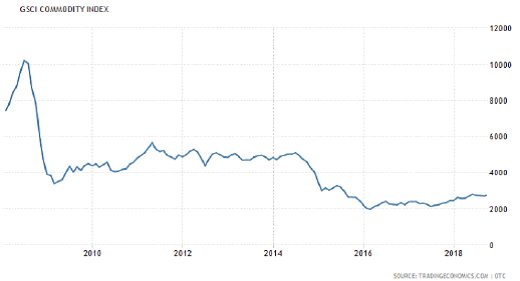 The value of this basket of energy, materials  and consumable commodities has dropped by  almost half in the period we are looking at,  and by three-quarters from its peak. Much of the  TSX Index is made up of companies that produce  and sell commodities, and the shares of most of  these companies have performed in accordance with the prices for their goods; that is to say, very badly indeed.

In contrast, as is well known, over the past ten years the dominant sector in the S&P 500 has been technology and, in particular, the very large global technology companies that include  Facebook, Apple, Google (Alphabet), Amazon, and  Netflix, collectively known as the FAANG stocks. While commodity prices have tanked, the value of these companies has soared, famously making Apple and Amazon the first firms ever to have a  market value of over $1 trillion. 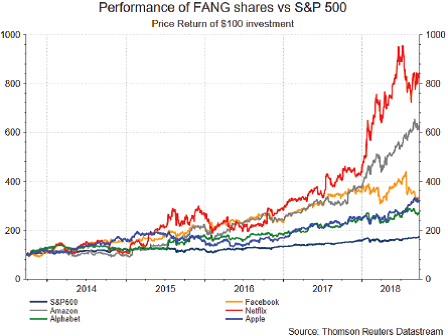 We recognized these trends and over the past five years we took the following steps:

We have started to increase our holdings in non-North American stocks and these now make up a further 4% of our equity holdings.

Partly as a result of these strategic decisions, likely your results have been considerably better than those of the TSX.

At our Outlook conference on October 24th, we will discuss the need for Canadian investors to over-come their home market bias, which leads most of us to over-allocate to Canadian stocks, and how we plan to expand our investment horizons in the coming years. We hope you will be able to join us.