The Next Recession is Coming. We Have No Idea When.

One of the great goals of economics, ever since the discipline was founded, has been to abolish the business cycle. Economic booms followed by recessions have always been a regular, if unpleasant, feature of life.  In the past 90 years there have been at least two global great recessions, and in North America at least 13 other significant recessions.  (A recession is a period in which the economy contracts significantly for at least two quarters in a row). On average, there has been a recession, be it great or small, once every six or seven years.

The transition from youth to age, from activity to senescence, and from vitality to death has always fascinated us. The metaphor of a fire that starts with a single flame, grows to a bright blaze and then becomes only glowing ashes is an apt metaphor for not only humans, but also economic cycles. Here is how Shakespeare framed it (Sonnet 73):

In me thou seest the glowing of such fire

That on the ashes of his youth doth lie,

As the deathbed whereon it must expire

Consumed with that which it was nourished by.

It is instructive to look at what has happened to the U.S. economy since the end of the last Great Recession in 2009 and reflect on whether the current economy rests on the ashes of its youth. Here is a graph showing the quarterly change in real US Gross Domestic Profit over the past ten years.

It is certainly hard to see any evidence of a fire burning out of control. In fact, the extended period of recovery following the end of the Great Recession of 2008/09 has been notable for the slow pace of growth, which has rarely been more than 3% per annum. This is in spite of massive monetary stimulus in the form of very low interest rates.

Following the last recession, the U.S. Federal Reserve bank cut interest rates to almost zero, where they stayed for five years, and it is easy to see that rates are still far below the norm for the past fifty years. Low interest rates make it easier for companies to borrow in order to expand, and make it easier for first-time buyers to buy houses.

The effect of low rates, coupled with the natural recovery from a deep recession, has been a massive increase in employment, driving the U.S. unemployment rate to low levels not seen since the 1970’s.

In the past, sharp drops in unemployment have made it harder for companies to find new employees and this has led to increases in wages for workers. This, in turn, has increased costs for companies, which have passed these costs on to consumers in the form of higher prices. This was the cause of the very high inflation in the 1970’s, which peaked in 1980 with an increase in the Consumer Price Index of 13.5% for that year.  Alarmed by the huge distortions in the economy caused by such high inflation, the Federal Reserve led by then-Chairman Paul Volker raised interest rates repeatedly until the Prime Rate reached 22.5%. The result was a significant recession which saw U.S. unemployment rise to 11%.  However, inflation was crushed, and has not exceeded 4% per annum in the past 38 years.

In order to ensure that we do not see a repeat of the 1970’s inflation, central banks in Europe, the U.S. and Canada have been raising short term interest rates and are expected to continue to do so for at least the rest of 2018. The intent is to cool the economy, or to extend the metaphor, to remove fuel from the fire without snuffing it out. The impact of this policy can be seen in the market for bonds. Over the past eighteen months, the difference between the interest rate on 10 year bonds and 3 month bonds (called the “spread”) has shrunk from more than 2% to less than 1%.  This indicates both a reduction in demand for longer funds, typically used for business expansion, and a higher demand for short term funds, often used to guard against market volatility. The interest rate spread on securities according to maturity is called the “yield curve”. 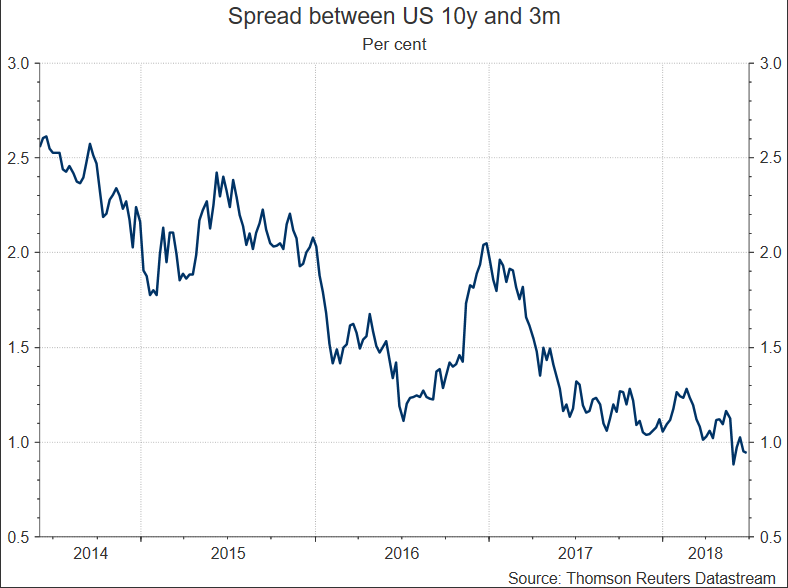 Some economic commentators believe that a flattening yield curve is a predictor of a coming recession, particularly if the interest rate for 10 year bonds becomes lower than the rate on 2 year bonds (called an “inversion”). This view has received a lot of attention in the press in the last month or so.  In the graph below we can see that the yield curve did invert, falling below the black horizontal line marking an interest spread of zero, before each of the last five recessions (the grey bars mark periods of negative growth in the economy).

The trick for central bankers is to adjust rates at a rate that will keep inflation at bay, without causing the economy to slip into recession. This is being made more difficult by an added factor: the threat of a global trade war caused by demands being made by the United States. Already, tariffs have been applied by the U.S. against exporters of steel and aluminum, and these tariffs have caused the affected countries to respond with measures of their own. More alarmingly, the U.S. is threatening to impose tariffs on up to $350 billion of Chinese goods, which would of course prompt massive retaliation by the Chinese. Perhaps most alarmingly, the U.S. has mooted a 25% import duty on all foreign cars and trucks. Tariffs raise consumer prices and reduce consumption, ultimately leading to a slower economy. The global depression of the 1930’s was caused in large part by a massive reduction in world commerce caused by a trade war.

As noted above, recessions are a fairly frequent occurrence, and a period of almost ten years without one has been a relatively rare occurrence in the past 100 years. Will increased interest rates cause the economic flames to flicker? Will a world trade war pour water on the fire, reducing it to ashes? Sadly, the track record of economists in forecasting recessions is dismal. Nobody is good at it, and the tendency has been towards over-caution. As the old joke goes, economists have forecast 10 of the last 5 recessions.

At the moment, corporate profits are very strong and continue to grow. Employment is at or near record levels, and there are few signs, so far, of inflation. Even on sunny days, there are often clouds on the horizon, and they do not always mean that a storm is coming. We believe there are some causes for concern, but on balance, we do not expect an economic decline in the near future. As always, our investment discipline focuses on finding well-managed, growing companies in sectors we believe have above average potential. When the next recession comes, and sooner or later it will, this investment style does a good job of preserving value and cash flow in adverse conditions.

Note: Baskin Financial Services Inc. attempts to use reliable financial data in its presentations but is not liable for any errors in any financial data utilized which it did not prepare.