Why airline stocks are ready to takeoff

Our recent investment in Delta Airlines has puzzled some of our clients. Given our strategy of buying and holding superior companies forever, why are we now investing in a highly cyclical industry with a well-known history of capital destruction?

Let’s start with a brief history of the North American airline industry. In 1978, President Carter signed the Airline Deregulation Act which allowed almost anyone to start an airline and fly from anywhere to anywhere within the United States. Prior to this, air routes, schedules, and fares were determined by the Civil Aeronautics Board, and airlines were profitable but inefficiently run.

The Airline Deregulation Act caused the airline industry to become the Wild West, and airlines bought planes and set up routes in order to grab market share. Fares fell significantly, and as a result, there were 70 airline bankruptcies between 1978 and 2008: 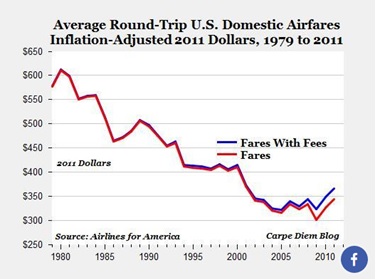 The period following the terrorist attacks of 9/11 was perhaps the lowest moment in airline history as air travel dropped by over 30% between 2000 and 2001. Between 2000 and 2005, the US airline industry lost a cumulative $52 billion and shed 20% of its employees. By 2013, bankruptcies and mergers had reduced the number of major airlines to just four: American, Delta, United and Southwest.

Today, these four airlines own 85% of the domestic seat capacity and the industry has an oligopolistic structure that does not resemble anything that the airline industry has enjoyed since deregulation in 1978. Air regulations prevent non-US airlines from flying domestic routes, and because these four control most of the gate capacity in their respective hubs, they have significantly more pricing power over their routes. For example, Delta operates nearly 70% of the flights that fly out of its core hubs in Atlanta, Minneapolis, Detroit and Salt Lake City. 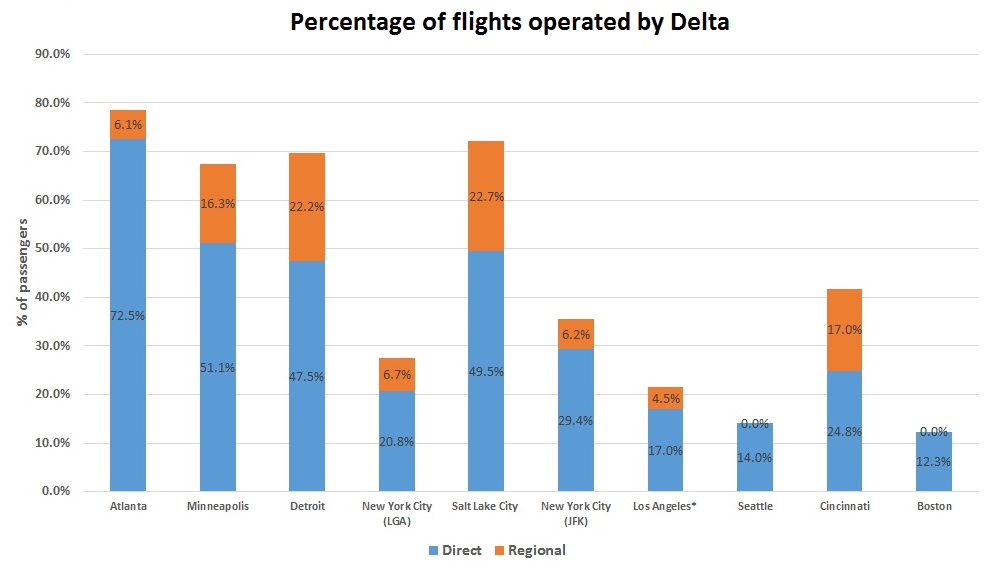 We have confidence that the airline industry understands its past and is now significantly more disciplined in adding capacity. Based on announced aircraft orders, capacity is expected to grow at around 2% through 2020, while the FAA forecasts passenger growth of 2.1% per year for the next 20 years.

Ultra-low-cost-carriers (ULCCs) such as Spirit Airlines, Frontier, and JetBlue are also not likely to challenge this dominance. Traditional network carriers use a hub + spoke model where small flights aggregate their passengers at major hubs to gather one large plane to the final destination. For example, American Airlines uses Los Angeles as a hub to fly to Hawaii. This lowers costs because it allows American to fly a larger, more fuel efficient plane. 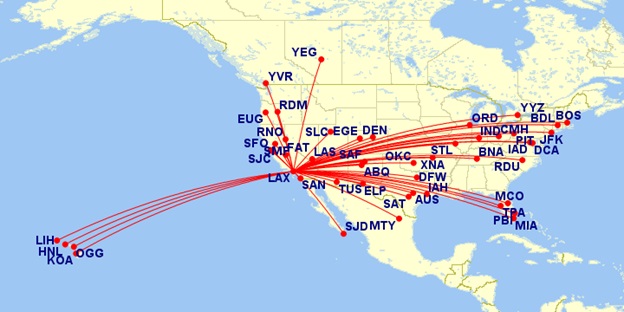 On the other hand, ULCC’s fly point-to-point, and for the most part do not offer connecting flights. This allows them to maintain flexibility over where to deploy their planes. ULCC’s typically operate a limited number of flights between two destinations every week in order to maximize the load factor (% of the seats in a plane that are filled). This is also partly because airports are simply out of available gates. Thus, the only people who are likely to fly with an ULCC are those who are directly travelling between the two locations. Since around 2/3rds of air travelers make at least one connection when flying, the market is protected for network carriers. Furthermore, ULCCs are not interested in market share or “defending” specific routes against competition. A study by MIT found that 26% of ULCC routes are abandoned after 2 years. The evidence shows that despite the growth of ULCCs, network carriers are able to maintain healthy load factors and we expect this to continue.

Airlines will also benefit from low oil prices. Keeping in mind the unpredictability of commodity prices, the outlook for oil prices is not strong, particularly in the United States. The fracking boom in the United States appears to have placed a cap on oil prices around $55-$65, and if electric cars become mainstream, the demand for oil will continue to fall. None of the major airlines currently hedge oil prices, so they will benefit from the continued pressure.

Given the decreased competition and low oil prices, airlines currently earn healthy returns on invested capital of over 20%, a major change from the past, and we expect this favorable situation to continue. The market does not appear to have fully appreciated these positives, and network carriers are still trading at an average of 9x earnings, well below the current market multiple of 16x.

We chose Delta Airlines over other airlines because we believe Delta to be the safest airline to own. Delta has the highest margins among the network carriers, and has the best operating reliability despite having the oldest fleet of planes (which it does intentionally). Delta is also the only airline that is primarily non-unionized, and maintains this by having generous profit sharing plans with employees. Delta is currently paying a 2.3% dividend yield and also plans to buy back over 10% more stock with its improved cash flow.

As with all investments, there are obviously still risks and despite the improved positioning, many things can still go wrong for airlines including stricter regulation, an oil crisis, or another 9/11. However we think the odds are in our favor, and that is all you can ask for as an investor.

Clients of Baskin Wealth Management are shareholders of Delta Airlines