Why we are buying an oil company

Why we are buying an oil company

Not that long ago, I wrote a blog explaining why we don’t own oil companies. We recently purchased shares of Canadian Natural Resources, one of the largest Canadian oil sands producers, for many of our clients and in our equity pool. Let me explain why.

Our investment strategy is to own great businesses. Some characteristics of “greatness” that we look for include a strong cash flow generation, predictable growth, and good capital allocation by the management. Despite being an oil producer that is subject to the volatility of energy prices, we believe Canadian Natural Resources meets these criteria.

The Canadian oil sands are some of the largest deposits of oil in the world. Unlike other oil companies that must continually seek out more sources of oil, oil sands producers such as Canadian Natural Resources have such large reserves that they can maintain production for many decades. Furthermore, the leadership team under N. Murray Edwards and Tim Mckay have done a terrific job of growing volumes at attractive prices while controlling production costs, allowing for strong free cash flow even during periods of very weak oil prices, with the dividend increasing every year for the last 20 years. 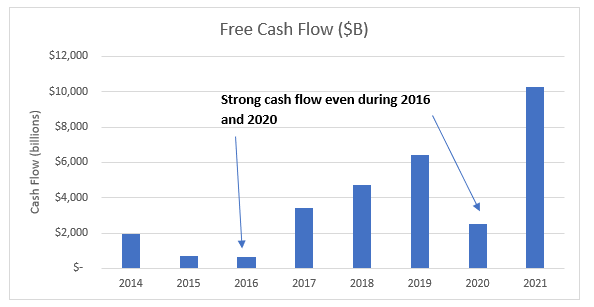 Management has demonstrated a willingness to be bold and contrarian, such as acquiring large heavy oil and oil sands projects between 2017 and 2019 when major energy producers were looking to exit the oil sands, moves that in hindsight turned out to be spectacular investments.

We think the stock today is attractive under a very wide range of oil prices, and we expect Canadian Natural Resources will remain profitable and continue to raise its already substantial dividend even if oil prices fell by 60%.

Our investment thesis is not predicated on high oil prices, but there is a case to be made that energy prices will remain elevated going forward. Low energy prices since 2015 and increased regulatory uncertainty has led to sharp underinvestment in energy and energy infrastructure around the world, with energy producers prioritizing capital discipline rather than growth. Furthermore, the Russian/Ukraine conflict shows no sign of ending and at the very least should lead to increased focus on energy security in places such as Europe, benefitting Western energy producers such as Canada particularly as new pipelines and export capacity is completed.

This is also the case from an environmental and social perspective. Partly due to the heavy scrutiny, Canadian oil sands producers are global leaders in innovating with technology to produce energy in a sustainable and socially responsible manner. Reducing its environmental footprint is a clear focus for the management including reducing emissions, power consumption, and freshwater usage and we believe that Canadian Natural Resources’ emissions today are comparable, if not lower, than many major energy producers around the world. Canadian energy producers are also leaders in other ESG aspects such as corporate governance, employee safety, and Indigenous relations, factors that we hope become increasingly appreciated as the world considers its energy policies resulting from the Russia/Ukraine conflict and the transition to a net zero economy.

Your position in Canadian Natural Resources will be funded with the sale of another existing position held by most clients. Where clients have specifically asked that they not hold any oil related stocks in their separately managed accounts, we will not make the purchase there.

For additional information, please feel free to contact myself, Barry, or your portfolio manager.