Like many of you, I have been watching “Let it Be”, the documentary about the making of the Beatles’ last album. George Harrison is the troubled, enigmatic figure in the piece, and maybe it was because he was worried about his income taxes. In 1965 when he wrote the song “Taxman”, the maximum income tax rate in the UK was about 90%. That was down from 95% a few years earlier.

We have not reached quite this stage in Canada, but income tax rates are over 52% in Ontario. We are bracing for some increases in the next Federal budget, expected in March. These could well affect returns on investment by removing or reducing the dividend tax credit, or by increasing the inclusion rate on capital gains. “Make the rich pay” is the slogan of the NDP, upon whose support the minority Liberals depend to remain in power.

This being the case it makes sense to take advantage of the few remaining ways to avoid taxes. One of these is the Tax Free Savings Account (TFSA).  The TFSA came into being in 2009, and today, for those who are at least 30 years old, the maximum lifetime contribution limit is up to $81,500. One of the great things about the TFSA is that it is not time restricted. Anyone 30 years old or older can open a new TFSA today and make the maximum contribution all at once. Over time, the account can be added to with each year’s new contribution limit, currently at $6,000. Savings in TFSAs are never subject to tax of any kind.

How large can a TFSA get? It depends, of course, on the rate of return and the number of years that compounding has to work its magic. A couple at age 35 has a very high probability that one of them (at least) will live to age 85, a span of 50 years. The table below show the amount to which a TFSA will grow at various rates of return to age 85, assuming it starts with the maximum lifetime contribution of $81,500 and that annual contributions of $6,000 are made each year. 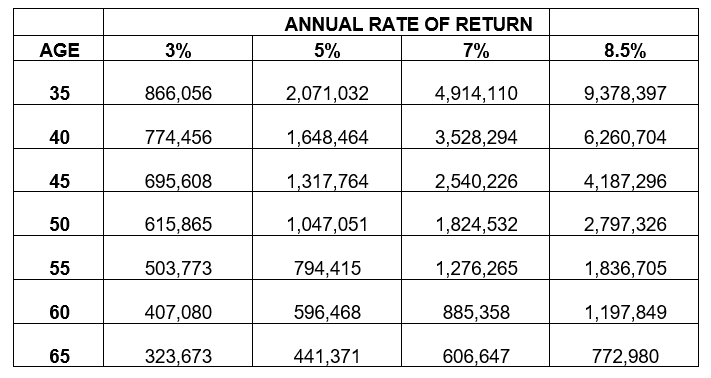 We don’t know what returns will be over long periods of time, but assuming a modest 5%, a person who is 45 years old today would see a TFSA grow to over $1.3 million by the time she or he reaches 85. For a modest annual contribution, that is a lot of money! If each member of a couple does the same, the amount would be a tidy $2.5 million or more.

Here are some other things to know about TFSAs:

As you can see from the above, it is really never too late to open a TFSA. If you don’t have one, speak to your portfolio manager and we can open one for you.