The Spread and Your Head

Investing may make more sense than reducing debt – but will you sleep as well?

An eternal question in the world of personal finance is “should I use available cash to invest, or should I use it to pay down debt”? Particularly in the time of COVID, when those lucky enough to continue working are often spending less and accumulating cash, it’s an important question. It’s also one that can be answered in a straightforward manner with a framework of questions to answer.

The first thing to realize about this question is that it is fundamentally a mathematical one. Personal finance and wealth management, in a big picture sense, are trying to maximize after-tax wealth. That generally involves utilizing savings vehicles, investing wisely, keeping expenses to a minimum, and making intelligent decisions with available funds. In using these funds to either pay down debt or invest, one needs to maximize the following equation:

So if, for example, you have a student loan with an interest rate of 3%, and you expect to earn 7% on your investments, your profit per year would be (7% – 3%) = 4% per year on the amount in question. Given the power of compound interest, this could result in a significant amount of profit.

The below chart shows the results of the following scenario given two strategies. In both cases, the borrower has $100,000 of debt in year 1, an interest rate of 3%, an investment rate of return of 7%, $10,000 per year available to allocate to either debt or investment, and a minimum repayment amount of $5,000 per year. In scenario 1 (the blue bars), the borrower pays back debt as quickly as possible, only investing once the debt has been paid off. In scenario 2 (the orange bars), the borrower makes only the minimum $5,000 debt service payments and invests the other $5,000. 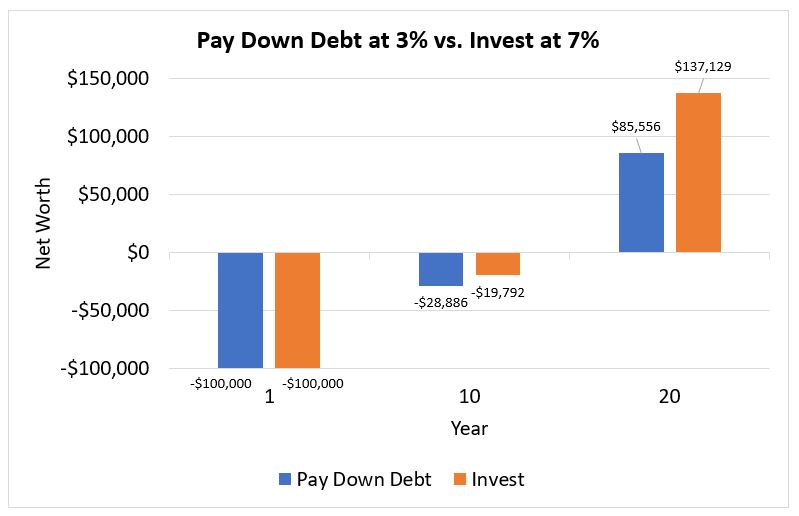 There are a few caveats to the above equation, however. The first, and probably most obvious, is that many investments simply don’t offer returns higher than interest rates on many kinds of debt. A high interest savings account at TD at time of writing pays 0.05% per year – less than 1/100 of the 7% seen above! Returns on GICs and reasonable quality bonds have also come down to yields of well below 3%. With interest rates on debt as low as they currently are, so too are returns on fixed income. If the interest rate on the debt is higher than the potential investment in question, the decision is easy – pay down the debt first.

Second, if not investing in a TFSA or RRSP, taxation will impact the returns on the investment portfolio. A non-registered portfolio which earns 5% in capital gains and 2% in dividends, owned by a person in the highest marginal tax rate, has an after-tax return of around 5.2%.

Third, while it’s possible to have a reasonable expectation for returns of most asset classes over a reasonable period of time – say a few years or more – particularly in the short term it can be near-impossible to predict investment returns with any degree of precision. So even if long-term returns on stocks are, say, 7% per year, long time investors know that yearly returns can regularly fluctuate from -20% to +25% and anywhere in between.

The other major consideration is one that cannot be expressed in equations and percentages. Many people simply are not comfortable with the idea of owing money to someone else. While this is often true for people who lived, or whose parents lived, through major events like the Great Depression, it is a common and understandable sentiment. For those who feel this way, even if a strategy may yield some extra money on the table when all is said and done, the extra stress and anxiety resulting from holding debt for longer is probably not worth it. Each borrower must assess their own feelings carefully to see if this applies to them as well.

When deciding between using cash for investment or for paying down debt, a two-step process is best. First, use a mathematical framework to estimate what the financial impact of both strategies would be – your financial planner or advisor is happy to help. Second, and just as importantly, think carefully about the psychological impact of holding debt for longer than required. Hopefully this article has provided some clarity and allowed for an easier decision.