What is the best way to maximize the effectiveness of your RESP?

The Registered Education Savings Plan (RESP) is a valuable program designed to encourage diligent and consistent savings in order to pay for a student’s post-secondary education. Usually, they’re opened by a parent or grandparent to save for a child or grandchild’s future schooling. An RESP has two primary benefits over a regular investment account. First, like an RRSP or TFSA, the funds inside an RESP are tax-sheltered. This means that there is no tax on the investment income earned as long as it remains in the plan. This allows the investments to grow more quickly as the growth is not eroded by taxes, and though there are taxes due on a portion of withdrawals, they are generally lightly taxed as they are considered income for the student.  The second benefit is that contributions to an RESP are partially matched by the government, increasing the value of any contributions made. Since paying for some or all of a child’s education is an admirable goal, making optimal use of the RESP is a priority for many families.

There are a few common strategies for maximizing the effectiveness of the RESP. For families with income above $91,831, the government will match 20% of all contributions made to the plan, up to a maximum of $500 per year, per child (families with lower income receive a larger match on the first $500 contributed, and have a slightly higher yearly maximum). This results in the most common strategy, which is to contribute $2,500 per year, per child, to receive the maximum $500 grant each year, up to the lifetime maximum of $7,200 grant, reached around age 14 at the earliest.

Since the funds are able to grow tax-free, it’s advisable to reach the $50,000 lifetime contribution maximum for each child if possible, regardless of the strategy used. This can be accomplished with a $10,000 contribution in year 0, and $2,500 contributions for 16 years thereafter. Assuming a 6% rate of return on the investments and $2,500 contributed per year until age 17, the RESP would grow to about $121,000 per child after 18 years, including contributions, grant, and investment growth. About a third, the $50,000 of total contributions, would be non-taxable on withdrawal. The remainder, comprised of grant and investment growth, would be taxable in the student’s hands when withdrawn; since most students have low incomes while in school, the actual taxes owed are generally small.

However, there is another strategy available for those with the means to pursue it. It involves contributing the maximum $50,000 of lifetime contributions per child immediately in year 0, and allowing it to remain invested until the student begins their studies. This strategy results in only $500 of grant being received since contributions are only made during one calendar year, but since the full amount is invested for such a long time, at a 6% rate of return this strategy would grow to around $152,000 after 18 years. The $50,000 contribution would again be non-taxable, and the remaining $102,000 would be taxed in the student’s hands on withdrawal. Below is a comparison chart showing the difference between the strategy of contributing the maximum $50,000 immediately, and the strategy of maximizing total grant received. 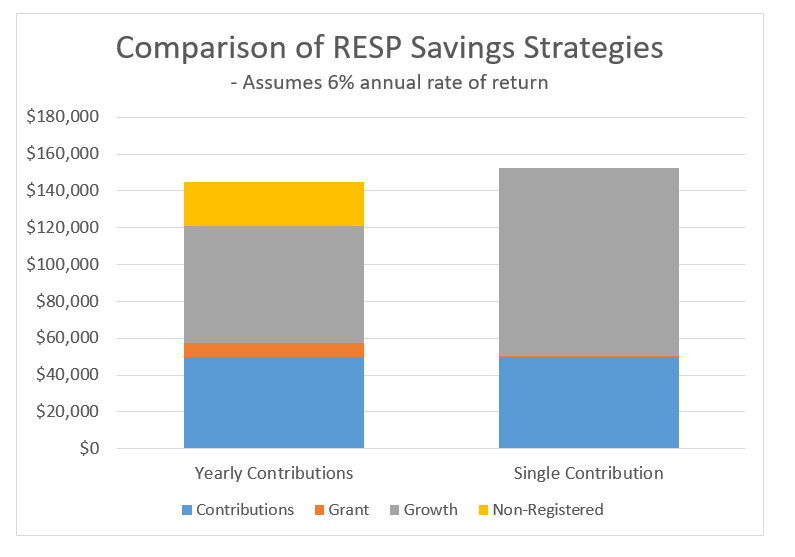 While contributing the maximum $50,000 to an RESP on day 1 is not possible for everyone, it’s an excellent way to maximize the efficiency of the RESP program for those able to utilize it – it is the most efficient savings strategy to accumulate as much money as possible for post-secondary education. If not feasible, the standard strategy of maximizing annual grant still represents a tremendous opportunity for parents and family members to save significant portfolios to help students achieve their educational goals.