Should we be worried about inflation?

The United States is a service-based economy. While it still makes cars, airplanes and appliances, most employment is in things like healthcare, education and finance. Out of about 150 million jobs in the U.S., 124 million or about 82% are in services. 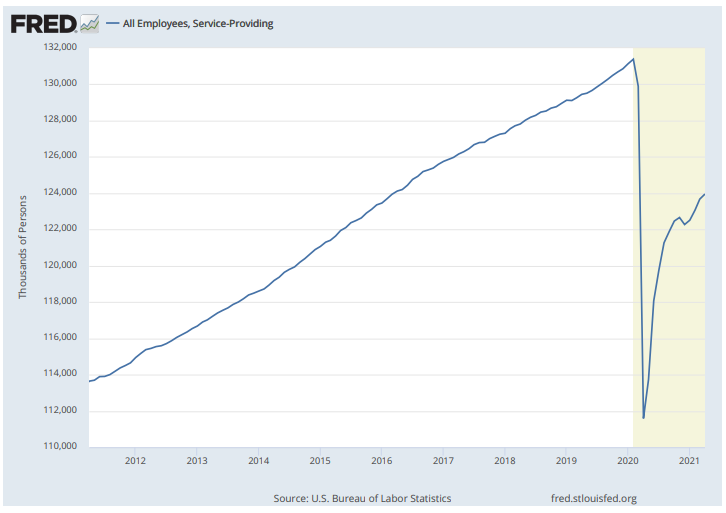 I mention this because it is a key, perhaps the key metric when thinking about the threat of rising inflation in the U.S. We have all seen the headlines about sharply rising costs for raw materials such as lumber, steel and copper. If you happen to be planning to build a deck or a house, these are obvious and painful realities. We are experiencing rising gas prices at the pump and we all know about the increasing prices for houses in core markets. It is natural for us to think that inflation is already, or will soon become, a real problem.

However, I would suggest that what we are seeing is temporary disruptions in supply chains as the industries that provide basic commodities ramp up from the semi-dormant state into which they were pushed by the COVID-induced recession which started just over a year ago. Lumber mills closed and output went to very low levels. Now, mills are scrambling to increase production to meet new demand. The same is true for steel mills and other suppliers of raw material. When supply reaches pre-recession levels, prices will almost surely come down, in some cases, very sharply.

The only thing that can really induce significant inflation in the US economy is a shortage of labour, and in particular, a shortage of service workers. As the graph above illustrates, about 20 million service workers lost their jobs, very suddenly, last spring. Only about 12 million have since been re-employed. The data on US unemployment that came out today showed a much lower than expected rate of growth in employment, and in fact, revised the numbers for March to show that employment was weaker in that month than originally reported. The unemployment rate announced today was 6.1%, and this is likely a significant undercount as it does not include so-called “discouraged” workers who are not actively looking for work. It also does not count millions of parents – nearly all women – who have withdrawn partially or totally from the workforce due to disruption in schoolroom based education which has forced them back home to take care of children now learning remotely.

While there are scattered reports of worker shortages in some industries (trucking, for example) there is little evidence of wide-spread upward wage pressure. It is also almost certainly the case that as vaccination becomes more wide-spread and lower wage workers exhaust their enhanced government benefits, we will see more entrants into the job market. If schools fully reopen in the fall, there will be an abundance of women hoping to re-enter the labour force. With demand for labour still quite weak and this anticipated increase in supply of workers, it is hard to imagine wages rising quickly, or by much.

The US 10 year Treasury Bond is a very sensitive instrument for monitoring inflation fears. If investors believe that inflation will exceed say, 2%, why would they buy bonds that pay less than that? Over the past year since the start of the pandemic, US 10 year yields have in fact increased by a full percentage point, but even so, the yield is still less than 1.75%. With today’s data, the yields fell, as expected.

The largest and most sophisticated financial marketplace in the world is the bond market. If the institutions that buy and sell bonds by the trillions daily are not worried about inflation, then neither am I, and I might add, neither are the major central banks in Canada, the US and Europe. All have pledged to hold the course with very low, accommodative, interest rates.

We may see a significant increase in inflation in 2022, caused by a combination of massive government spending and very low interest rates. At that time, we would expect to see central bankers gradually raise rates to cool economies. But we are not there yet. The balance of 2021 should see very good growth, but not too much inflation.

The big lessons of the last year

What happened to the Super League?