THE END OF THE WAR ON SAVERS

Before the Great Financial Crisis of 2008-09, savers could easily invest in perfectly safe GICs, bonds and savings accounts with interest rates over 4%. There was no need to take the risk inherent in buying stocks; the yield was higher than the rate of inflation, and based on past history, most savers felt that they would be able to reinvest at the same or similar rates going forward. Sadly, this turned out not to be the case. As the chart below clearly shows, the impact of the financial crisis on interest rates was profound and long lasting. The yield on the Canada 5 year bond, a good benchmark for both borrowing costs and deposit interest, fell from around 4% to less than 1% over the next six years. Even in the face of a robust economic recovery, rates stayed very low, mostly below the rate of inflation. This was further exacerbated by the COVID crisis which saw the 5 year bond touch a record low at less than 0.5% in the spring of 2020. Low risk saving was very unprofitable for about 12 years. The low rate revolution became a war on savers that lasted the better part of twelve years. 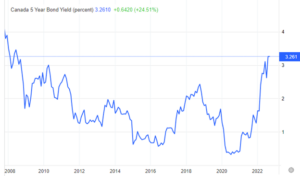 We are all aware that over the last eight months or so, inflation has suddenly re-emerged as an issue. It is not my intention to go through the causes that we have all seen noted so many times: COVID, the war in Ukraine, excess monetary and fiscal stimulus, to name the main ones. Suffice it to say that central bankers in the developed world have decided to take inflation seriously, and they are doing so by raising interest rates quickly and substantially. The yield on the five year bond has exploded upwards, rising by a full 3% in about a year. Many believe the increases are not over, and will not be until 2023.

Most of the commentary on rising interest rates has focused on borrowers, and the added costs they face going forward. Whether it is mortgages, car loans or credit cards, there will certainly be added stress, and likely real problems for the over-extended. Much less has been said about the real benefits of rising rates for savers and conservative investors.

Like most portfolio managers, over the past ten or twelve years we have adjusted the asset allocation mix for our clients to de-emphasize low yielding fixed income investments and concentrate on more lucrative equities. This has been a very good decision, at least until the last few months.
Returns from stocks have been much higher than those available from bonds, GICs and savings accounts. Now, however, we are in a different environment, and the availability of attractive yields on low risk securities is causing us and our clients to take a fresh look at asset allocations.

We believe that the high rate of inflation that we have seen in North America over the past six to eight months will prove to be short-lived. We are already seeing commodity prices drop very substantially, supply chains seem to be getting unkinked and housing prices are dropping, in some cases quite sharply. We have good reason to believe that the central bankers will prevail, and that inflation will revert to the 2% – 3% range that had prevailed for much of the last forty or some years. If this is correct, there is currently an opportunity to lock in a positive real returns (cash yield adjusted for inflation) for the first time since 2007.

Right now, we are buying good quality Canadian corporate bonds that yield around 4.75% to 5% per year for the next two to three years. If we are right about inflation, that provides a real return of about 2% to 3%. Not to bad for a very low risk investment. The war on savers is finally over.

Every client at Baskin Wealth has an asset allocation discussed and decided between the client and the portfolio manager. What is right for one client or individual might not be a good choice for another. However, it is important for us to note that the new higher rates of return have expanded our toolbox. We can now reduce risk without giving up as much return as has been the case in the past ten or so years.

How Europe set itself up for the energy crisis

How the CHIPS act could revive the U.S. Computer Chip Industry