Our last newsletter was titled “The Summer of our Discontent”, and for good reason. During June, the major stock market indexes were solidly in bear market territory. The S&P 500 had dropped by 23.7% at its low and the NASDAQ was down by a fairly shocking 32.5%.  We wrote at that time that much would depend on earnings reports for the 2nd quarter, and the forecasts that companies would make about the outlook for the second half of the year. Over time, corporate earnings drive stock prices.

I am happy to say: so far, so good. The great majority of reporting companies have met or surpassed their expected financial results. More importantly, with a few exceptions, the conference calls hosted by reporting corporations have been quite positive about the second half. We have heard very little doom and gloom in the forecasts. To be sure, problems remain. Walmart reported that its customer base, mostly lower income, had cut back on the purchase of clothing and electronics due to the higher cost of food and gasoline. Ford announced that it had 90,000 cars, all ordered by customers, it could not complete due to a shortage of microchips. A number of formerly high-flying companies involved in cryptocurrency reported disastrous results, to nobody’s great surprise.

The stock market has responded well to the solid results. At the time of writing, the S&P 500 has gained about 500 points or 14% from its low in June. The NASDAQ has recovered by about 17%. Important stocks in our client portfolios have had similar rebounds from their lows in June: 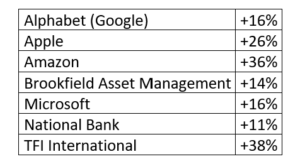 There is no doubt that important problems remain. These include, of course, the rise of inflation in major economies, the war in Ukraine, and the continuing effect of COVID on supply chains, including in particular shipments from China. However, there is reason to believe that inflation has peaked, as evidenced by the recent sharp declines in the price of important commodities such as oil, gasoline, wheat, corn and copper. There is also reason to believe that supply chains are finally getting straightened out. We can see this in the significant decrease in the cost of shipping a standard container from Shanghai to Los Angeles – down from as high as $20,000 per container at the peak of COVID to a recent $3,800, a drop of over 80%.

Increases in interest rates by the major central banks around the world have had their desired effect. We are seeing reduced demand particularly for housing (sales down 24% year over year in Ontario) and consumer discretionary goods. If, together with the improvements in supply of goods, this results in a significant drop in inflation, we expect to see a stabilization of interest rates at a level slightly higher than the current rates. We might even see a drop in rates in early 2023.

Our clients are understandably worried about the wide-spread predictions of a recession. Our view is that if there is a recession, it will be relatively mild and relatively short. We see little evidence of weakness in the labour market and no sudden reduction in consumer spending that would lead us to believe that economic conditions are currently bad, or that they will get much worse.

We have had a tough start to 2022. We enjoyed a very good July, and have hope that the remainder of the year will also see improved prices for equities.

Barry Schwartz on BNN Bloomberg – If a recession happens, it’ll be the weirdest one – July 26th, 2022

Howard Marks’s thoughts on investing during a recession

Why gas prices are actually so high