Every now and then I stumble on the perfect graph. The one below, courtesy of Global News, very much describes my own experience in the Toronto housing market. When my wife and I bought our first house in Toronto in 1980, we had combined income of about $45,000. We paid $100,000 for a small house in the Pape/Danforth neighbourhood of Toronto.  That was a bit more than twice our income at the time, just about as shown on the chart below. Our down-payment was $25,000, about half a year’s income.

Since that time salaries have gone up, of course. The jobs we had then would probably be paying about $120,000 in total now.  The problem is that the house we bought for $100,000 is now selling for about $1.1 million. What cost us twice our income now would cost a young couple nine times their income, also pretty much as shown on the chart. The minimum down-payment of 15% would be $165,000 or almost one and a half years of family income.

Many people, particularly those over 50, will react by noting that interest rates and mortgage payments are much lower now than they were in 1980, and that is certainly true of interest rates.  Our mortgage was $75,000 at 12.75% and cost us around $813/month. The couple who buys our old house (now by the way 40 years older) will be paying around $4,000 month. The mortgage cost will be 40% of their pre-tax family income.  Even with the much higher interest rates back then, ours was about half that at 22% of pre-tax income.

I understand why people do this. We are sold, actually over-sold, on the notion of home ownership as a goal. We Canadians lead much of the industrialized world in the percentage of families who own homes, as opposed to renting accommodation. Here is a look at some comparable countries: 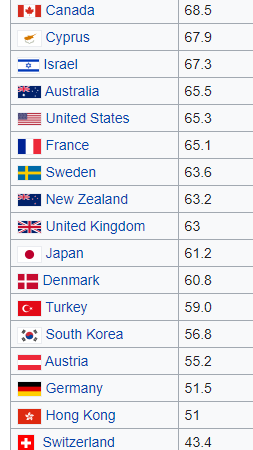 We as a nation believe that there is something inherently better in owning as opposed to renting. I am pretty sure that the relentless rise in the price of homes over the last forty years has a lot to do with this. After all, had we stayed in our first house, we would have a capital gain of $1,000,000, ten times our money. What’s more, we wouldn’t pay any tax on it. That’s a great investment return of about 12.5% compounded.

The question of course is whether that can keep on going. The price rise in the last forty years is very closely tied to the equally relentless drop in interest rates over the same period. Here is a look at the available mortgage rates over the past fifteen years:

Rates are about 1/3rd of what they were fifteen years ago, and that does not even go near the rates of more than 12% that prevailed in 1980. I believe that accounts for much of the rise in housing prices. But what happens when rates rise? I suspect that the increased costs of home ownership will drive many owners who are struggling to keep up with mortgage payments now, with record low rates, to sell. There will suddenly be a lot of houses on the market, and bidding wars will be a thing of the past. I can easily imagine house prices in the major urban centers falling 15% to 25% if 5 year mortgage rates return to the levels of fifteen years ago.

We are entering an interesting period in which central bankers are trying to balance competing interests. On the one hand, governments and many businesses have balance sheets swollen with debt incurred during the COVID crisis. Higher interest rates would be a heavy blow for them to take. On the other hand, we are seeing some signs of inflation in the economy, and central bankers know that they cannot let that get out of control.  Most economists believe that we will see stable interest rates in 2021 but inevitable increases in the years thereafter. Yields on US 10 year bonds are up about 1% in the last year. That’s a big jump, and that could be just the start.

Everyone has to live somewhere, but there are lots of rental options. With prices at this level, and the threat of rising rates, the smart move now is to buck the trend. Rather than get engaged in crazy bidding wars leading to equally crazy prices, boycott the whole process. Rent, don’t buy.

The world’s largest firms are bigger, techier, and more Chinese