A month or so ago I wrote about why a Biden presidency might be good for the US economy. Now that we know that Biden will be President, but that the US Senate will most likely remain Republican, I will update my thoughts, and add some ideas about Canada-US relations.

The Canada-US relationship, if not unique, is certainly unusual. A huge volume of trade flows across the border, about US$1 billion per day of both exports and imports. A staggering 75.4% of all Canadian exports go to the US. Under the Trump administration, Canadian goods became the subject of seemingly random tariffs and restrictions affecting such goods as aluminum, steel and lumber. These tariffs were imposed not by legislation but by Trump directly via executive order, usually at the behest of US companies which had made significant campaign contributions to the Republican party.

At the same time, Canadians studying and working in the US became victims of a war on immigration conducted by the Trump administration. Temporary and permanent work visas became harder, and in many cases impossible, to obtain. Countless lives were disrupted and many businesses were destroyed.

We expect that US trade policy will become more rational and less driven by campaign contributions. As well, we expect immigration policy to revert to norms in place before the Trump administration. Canada and Canadians will benefit from both these changes.

One project that will likely be affected almost immediately by the Biden win is the Keystone Pipeline, a huge international multi-year project of TC Energy (formerly TransCanada Pipeline). Biden has pledged to stop the project, and he likely has the power to do so.

Another industry affected by the election is the production and sale of cannabis products. Marijuana was legalized in another five states in the election, bringing the number of de-criminalized states to fifteen, including now New Jersey. It is viewed as inevitable that New York and Pennsylvania will soon follow. This is bad news for the Canadian industry as the growing US market will produce much more product much more cheaply, taking advantages of better growing conditions and economies of scale. The already reeling Canadian industry will face further blows.

Finally, the failure of the Trump administration to take the COVID-19 pandemic seriously has had enormous consequences that are felt in Canada as well as the US. Since Canada closed the border with the US in March, over 3 million crossings have taken place for designated “non-discretionary” purposes (truck drivers, cross-border workers) and for family visits by those with dual citizenship. Even with quarantine laws in place, there is no way that a raging outbreak in the US can be kept from spreading into Canada. One can only hope that efforts by a new Biden administration to get the health crisis under control will help Canada keep Canadians safe.

Here are six reasons why a Biden administration might be good for the US economy and for stock markets. These comments are updated from one month ago in light of the outcome of the election.

The Trump era has been remarkable for its pugnacious and counter-productive trade strategy. Using a series of tariffs, often imposed by executive order and therefore with no legislative input, the U.S. has damaged its trading relationships with almost all of its major trading partners including Canada, China and many European countries. The goal of the policy has been to reduce the persistent US trade deficit in goods, mainly by restricting imports. This policy has failed in all regards. The US trade deficit is at record levels but at the same time, the tariffs have led to increased costs to consumers for many staple items. Retaliatory tariffs have devastated some US sectors, such as soy bean production, which has led to the need for expensive bailouts. Important international organizations such as the World Trade Organization had been weakened. There is every reason to believe that a Biden government would pursue rational, mutually enriching trade agreements with partners, and would seek to strengthen important international bodies. 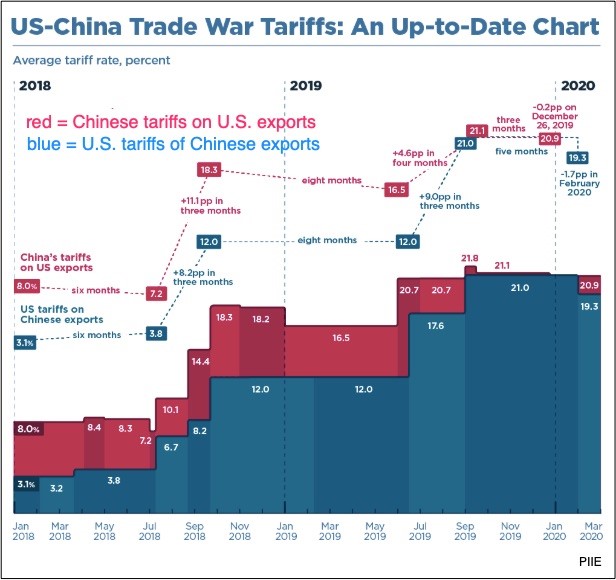 Like most western countries, the US is in demographic decline. The birth rate is no longer able to produce enough young workers to replace retirees. This has increased the percentage of the population who are out of the labour force, and this problem will accelerate as the baby boomers retire in great numbers for the next ten years. Eventually, the ratio of productive workers to non-workers will get so low that economic growth will go into a permanent decline. The best solution to this problem is immigration, particularly immigration of young, educated and skilled workers. This is the policy that Canada has pursued with success over the past two decades. 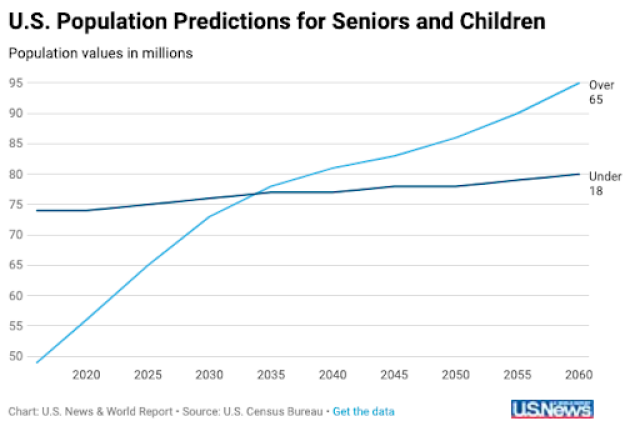 Under the Trump administration the absolute opposite has occurred. Visa availability and regulations have been changed to exclude the very workers the U.S. needs the most, including top students educated at Ivy League schools. The war on Mexican and other Latin American immigrants, legal and otherwise, is also counterproductive as it has made manual labour industries such as agriculture less productive.

We would expect these policies to change. Whether it is politically possible to admit the number of immigrants needed to move the demographic needle, likely at least 2 to 3 million per year, is unknown, but any change will be for the better. Young households, no matter what language they speak, are big consumers and lead to faster economic growth.

A center-piece of the Biden campaign is a commitment to a major infrastructure initiative to renew decaying and obsolete U.S. roads, bridges, sewer and water utilities. This is actually a promise that Trump had made in 2016, but which was never fulfilled. Here is a map showing, for example, the structurally deficient bridges in the US (Tip: avoid driving in south-west Iowa and central Oklahoma): 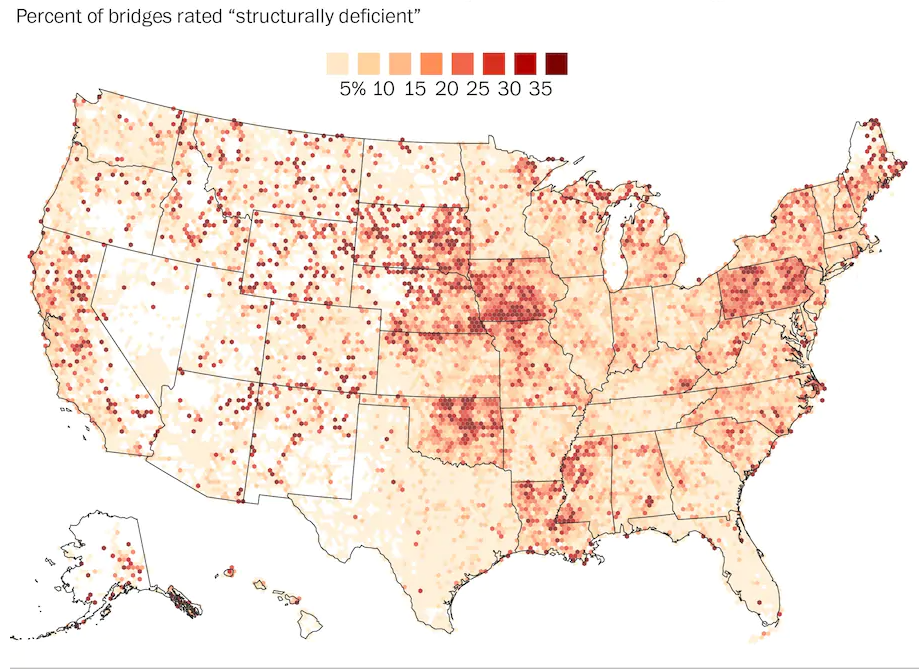 As well as creating jobs in construction, engineering and materials extraction, this initiative will increase productivity and likely save lives. The deaths and illnesses in Flint Michigan caused by and old and dangerous water system are well known, but are only the tip of a much larger iceberg. Biden plans on spending up to $1 trillion on these long postponed and much needed projects. Much of the money will be spent in rural areas where it is badly needed. We would expect that this is a legislative program for which there will be broad bi-lateral support as many projects will be undertaken in “red” or Republican controlled states.

Trump ran on a promise to revive the coal industry and bring much needed jobs back to the hard-hit coal belts states such as Kentucky and West Virginia. Luckily for the environment, but sadly for the workers, this failed.

Coal mines are closing and coal power generation is being replaced by wind, solar, hydro and biomass facilities. Current federal laws and regulations under the Trump administration are heavily weighted towards fossil fuels. Biden is committed to a future of sustainable energy in the U.S. This will lead to major investment in modern generation capacity and will hasten the demise of sunset industries such as coal mining and eventually, the use of oil for heating and power generation. Government encouragement will lead to a major boom in retro-fitting of homes and businesses, and eventually, replacement of gasoline and diesel power motor vehicles by more efficient and cleaner electric vehicles. The coming boom in sectors such as  new battery technologies and use of hydrogen as a fuel source should more than make up for the shuttering of companies and loss of employment in the old-style energy industries. 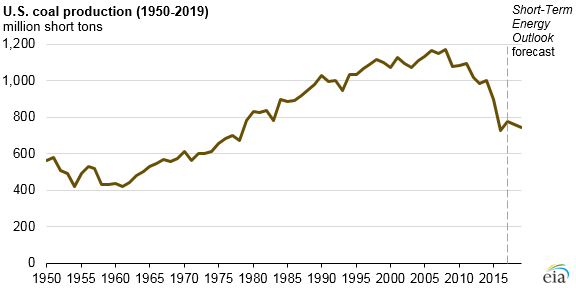 This is an initiative that could well be stalled or defeated by legislative gridlock. The Republican controlled Senate remains in thrall to the fossil fuel industry, and will likely defeat or de-fang any meaningful measures to inhibit big oil, fracking and coal production. However, there are things that can be done by executive regulation, as Trump demonstrated.

Nobody but the cheaters win when rules are not enforced. Sacking income tax auditors, putting industry lobbyists in charge of environmental regulation and preventing the Department of Justice from prosecuting white collar criminals has enhanced a culture of corruption and non-compliance. In the world of Trump, only suckers and losers obey the law, and only the little people pay taxes. The erosion of confidence that government is fair and unbiased will likely take years to rebuild, but it is a necessary, indeed crucial, chore. No democratic society can thrive without voluntary compliance and wide-spread obedience to laws which are deemed to be fair and reasonable. The only two alternatives are police states such as China, or failed or failing states such as Columbia or Syria. The amount of tax revenue lost to tax evasion, corruption and non-compliance in the U.S. is in the hundreds of billions per year. The trend must be reversed.

One of the first concepts taught in the study of economics is “Marginal Propensity to Consume”.  The fancy title reveals a very simple truth: Poor people spend a higher proportion of their income than rich people. They have no choice. Most spend pretty much every dollar they make. For the rich, at some point most additional (or marginal as economists would say) income simply gets saved, rather than spent. The richer a person gets, the lower the marginal propensity to consume. The problem with this is that as the rich garner a larger and larger share of an economy’s income, the amount that gets spent is necessarily reduced. This hinders economic growth and can lead to a glut of savings. This is exactly what is happening in the U.S., where the share of wealth accumulated by the top 1% of the population is at a record high level of more than 35%, and the share of the bottom 50% is essentially zero. 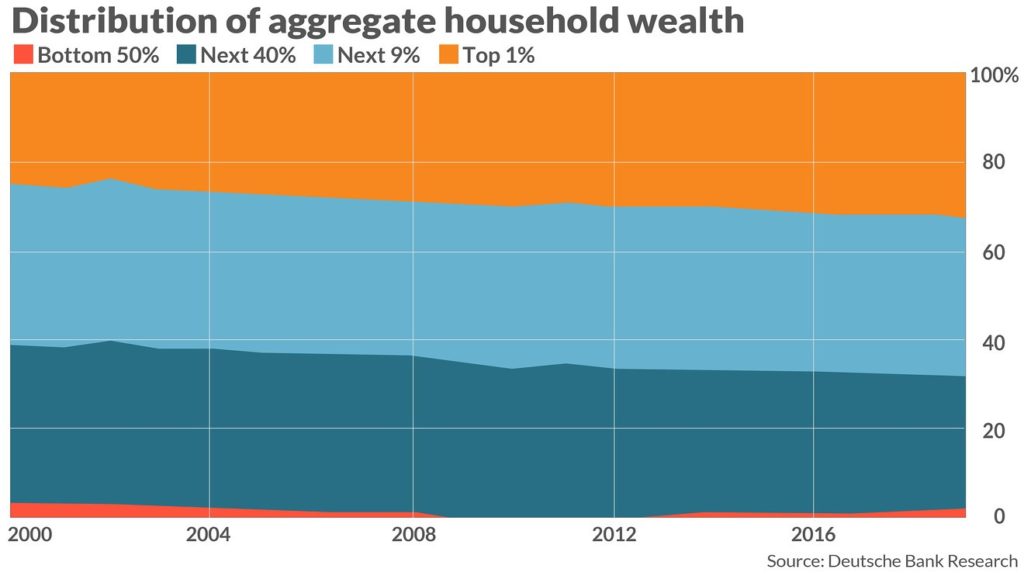 Maldistribution of wealth and income lead those in the bottom categories (in the US at least 50% of the population) to believe that the system is rigged against them. This leads to a host of social ills ranging from non-participation in the labour force, epidemics of the diseases of despair – alcoholism, drug addiction, obesity and suicide – and loss of faith in government and the greater society.

Changes in tax laws, labour laws, health policy and housing policy have exacerbated a trend that was already evident 40 years ago. Biden has made reversal of this trend a cornerstone of his economic policy, and it is this, most of all, which scares conservative voters, and has given rise to Trump’s use of the dog-whistle term “socialist” to characterize the Democratic platform.

However, even the ardent capitalists at JP Morgan and Goldman Sachs have recognized that the concentration of income and wealth must be stopped. They have examined the Biden platform carefully and have declared it as sound, good for the economy and good for the markets. We agree.

Fun with numbers – should you realize capital gains and pay taxes early?

You get what you pay up for

There are good reasons to be bullish on stocks

Howard Marks’s thoughts on investing in a low rate environment

What does the stock market do around elections?