Paul Martin was Canada’s Minister of Finance in the mid to late 1990’s, when Jean Chrétien was Prime Minister. When he came into office, Canada’s public debt had reached the dire and unenviable level of 100% of Gross Domestic Product (GDP), a level only previously seen in the aftermath of World War II.  Martin took on the difficult and unpopular task that the previous Mulroney government had tried but failed to complete: to make Canadians care about the debt and more important, make them willing to sacrifice to bring it under control. Martin succeeded.

In 1998 Martin produced the first balanced budget seen in a generation, and he laid the groundwork for the subsequent budget surpluses under the Harper government. During the next 12 years the level of debt to GDP fell from 100% to 67%. 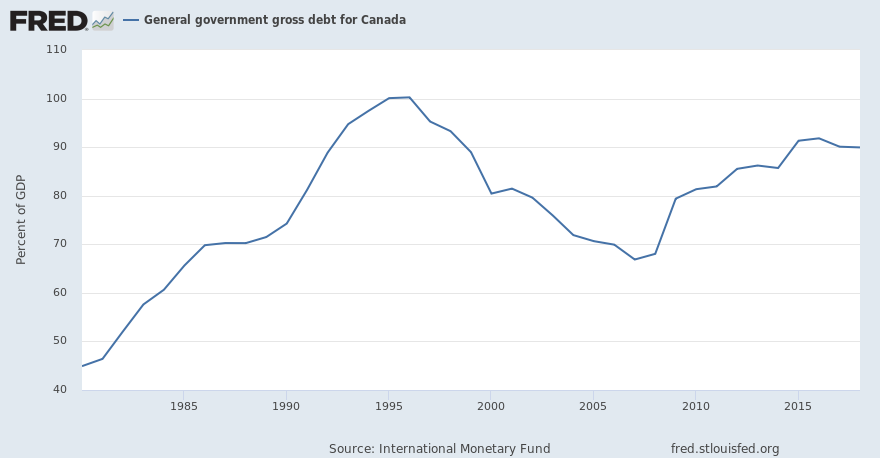 During the Great Financial Crisis of 2008-09, the federal government was forced to increase spending to support a badly damaged economy. Unfortunately, relying on what had looked to be a strong economy, the Harper government had recently reduced the GST/HST by two full percentage points. The resulting drop in revenue and increase in spending caused the budget deficit to soar and the ratio of debt to GDP to abruptly reverse course.

The COVID-19 pandemic has once again forced the federal government to prop up the economy, but this time, the amounts involved dwarf those spent twelve years earlier. It is estimated that the federal government will run a deficit equal to about 16% of GDP in 2020 and likely over 10% of GDP in 2021. This will certainly force the level of debt to GDP back over the 100% mark, and may in fact lead to the largest debt to GDP level on record.

In his Speech from the Throne and his subsequent remarks, the Prime Minister addressed the obvious question: Can Canada afford this level of spending? Yes, he said, we can afford it, because of low interest rates, spending doesn’t really matter.

At least for the moment, he is right. The government of Canada can currently borrow money for 10 years at an interest rate of only 0.55%. This is a record low level, and is 85% less than the 3.85% average interest rate over the last 20 years. The amount of interest that will be paid on $7 billion of new debt is equal to the amount it used to pay on only $1 billion of debt. From this point of view, racking up huge levels of new public debt simply does not matter, because the cost is so low. However, as we all know, lenders want to be repaid, and eventually, borrowers have to repay them.

Does the government plan to repay the extra $500 billion or so that it will borrow in 2020 and 2021? Of course not. Governments seldom pay debt off; they simply refinance it, or roll it over, as the saying goes. The problem is, nobody knows what the interest rates will be when all of the new debt being issued this year and next starts to come due. We are assured by the Bank of Canada, by the US Federal Reserve Bank and by the European Central Bank that interest rates will stay low. Likely they will, in the short term. But for how long, and how low? What will the Canadian government do if the 10 year bonds it sells today must be rolled over at an interest rate of 4% or 5%? The answer is that it will have no choice but to pay the higher rates, and the borrowing costs will go from not mattering to mattering a lot.

The risks are obvious, but in these particular circumstances, unavoidable. Failure to provide payments to newly unemployed workers, failure to backstop banks on mortgages in arrears and failure to protect small business owners from being evicted as rent payments fall behind would be self-defeating and economically short-sighted. However, even in the light of all this necessary emergency spending, the federal government wants to do more. Much more.

Programs, so far without details, promise to get the government into the child care business; to expand pharmacare; to expand airline routes to underserved markets;  to vastly increase infrastructure expenditures; to vastly increase climate change spending; and more. It is an unpriced, undetailed laundry list of fiscal excess.

Governments, by nature, think about today, and the next election. Spending now, kicking the can down the road and leaving the consequences for others is a way of life. As always, we, the taxpayers are the others. We don’t get to leave the unpleasant details to the future. If interest rates go up, we will bear the burden.

From 1995 to 2005 Canadians saw services cut, sometimes slashed, as the federal government got its financial house in order. Now, all the good work done in those years is in danger, and the sacrifices made will be for nothing. The level of spending matters. The accumulation of debt matters. We will pay the price.

Why we still love our FAANGs (+ Microsoft)

The Spread and Your Head

Wise musings about the market from Howard Marks

Confronting our anchoring bias in the markets