I don’t think anybody expected 2019 to be a huge year for the stock market. You may remember that 2018 ended with a big thud. The S&P 500 fell a frightening 14% in the 4th quarter of 2018, and the NASDAQ did even worse, falling 18%.  Those plunges ate up all the gains from the first nine months of the year and most investors ended 2018 with losses. All that changed in 2019. The year got off to a tremendous start with a gain of 10% by the NASDAQ in January alone and, despite a fairly nasty drawdown in May, all the major indexes ended up with big gains. Our own TSX produced a 19% win before dividends, but this was dwarfed by the NASDAQ performance of +35%.

The obvious question is, deep into the longest continuous period of economic expansion in U.S. history, what caused the stock markets to produce such remarkable gains? We think that there are three factors which can be identified, and which can give us some clues as to possible future performance.

In the first place, unemployment in North America remains at the lowest level in over 70 years. The U.S. economy has added jobs for 128 straight months since the end of the great recession in early 2009. There are a remarkable 22 million more people employed than there were in 2009. As you can see, the addition of new jobs has been very steady (regardless of who was sitting in the White House). The unemployment rate in the U.S. is currently 3.5% compared to 9.1% in 2010. In Canada, the unemployment rate fell to as low as 5.5% in 2019 before rising to 5.9% in November. Despite continuing fears of a coming recession and an end to the employment boom, we simply have not seen any sign of reduced demand for labour in the U.S. economy. Equally surprising, there has not been any significant increase in wages. All these jobs have been added without any underlying growth in inflation.

Number of Employed Persons in the U.S. – Past Ten Years 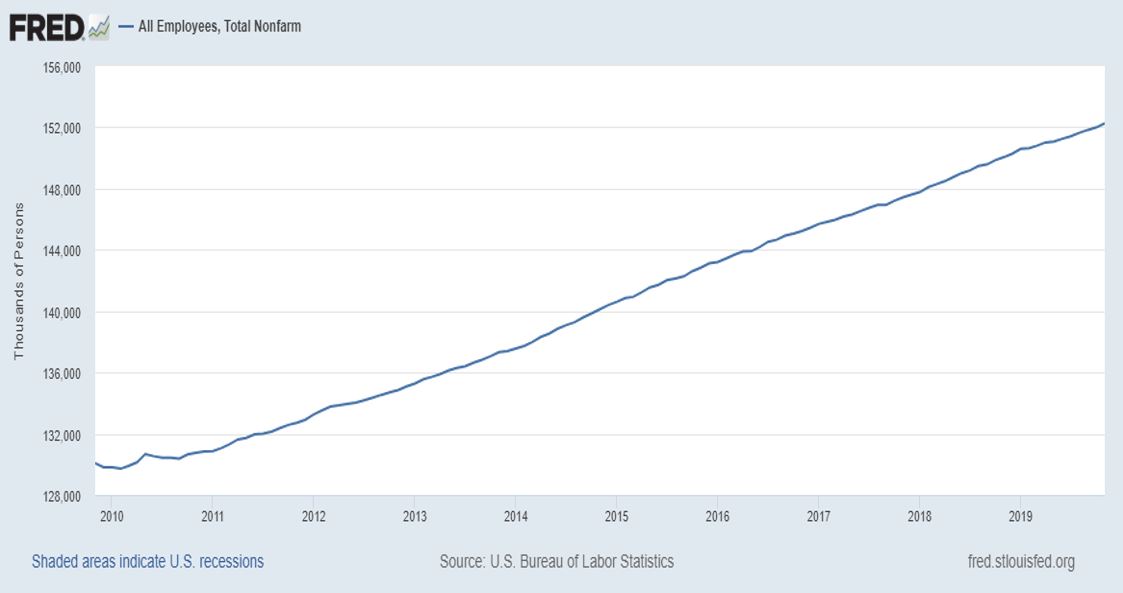 Not surprisingly, higher spending translates into higher corporate profits, and profits are the reason that people buy stocks.

Finally, all this growth in employment, spending and profits has been taking place within the context of very low interest rates. The U.S. Federal reserve started to raise rates but, fearing that it would cause a recession, reversed course abruptly. With medium to long term bonds yielding less than 2%, most investors found stocks to be a more attractive asset category. Here is a chart of the yield on the 5-year U.S. Treasury bond over the past ten years.

During 2019, themes which we had identified in 2017 and 2018 as priorities for your portfolios did very well. We increased our investments in these two sectors:

Canadian names generally did well by most standards but trailed the U.S. companies in performance. In particular, yield-oriented companies once again did less well than higher growth companies.

Naturally, the question on everyone’s mind is what 2020 will have in store. January has gotten off to a strong start despite the impeachment of the President of the U.S., a crisis in Iran and a pending Brexit in the UK. As we start earnings season and see the numbers for the fourth quarter of 2019, we will learn more. In our view, aside from momentum based speculation, stock prices are always a product of earnings expectations and the amount investors (not speculators) are prepared to pay for those earnings. Right now, with interest rates so low, investors are prepared to pay $20 or more for $1 of earnings, and while this looks expensive in historical terms, it is in our view appropriate with interest rates at this level.  If companies show solid earnings for the end of last year and good projections for the first half of 2020, there is no reason stock prices cannot continue to rise to new highs.

As discussed in our Outlook 2020 presentation, now available online as a video, as always we expect certain sectors to perform better than others. We continue to believe in strong well managed companies with a history of profits and operating in sectors with a foreseeable growth runway in front of them. That is what we will buy for our clients in 2020, and we will closely monitor both the macro economy and the progress of each portfolio company, making changes when circumstances require us to do so.

We wish everyone a happy, healthy and profitable 2020.