A common phenomenon in Canadian business is that it tends to lag the US in trends, and the trend towards grocery e-commerce is no different. Including home delivery and “click & collect”, digital penetration in Canada is currently only around 1% as compared to 4-5% in the US and high-single digits in the U.K. and France. As with other industries, COVID has accelerated the Canadian grocery sector’s digital adoption and all the major supermarket chains have seen triple-digit increases in e-commerce sales this year. Even with this fast, recent growth, however, grocery shopping in Canada is still almost entirely a hands-on, in person form of commerce.

Despite largely being a local business, the Canadian grocery sector is concentrated: 5 companies including Walmart and Costco have a combined 80% market share. Loblaws, Sobeys (Empire Company), and Metro each have multiple brands covering high-end, budget, ethnic, and pharmacy categories, and also control the best sites in major cities.[i] Within specific geographies, market shares are even higher: Metro has a strong presence in Quebec and Ontario and Sobeys over-weights to Quebec, Alberta and Atlantic Canada.

Canada is also a tough place to run a grocery chain. 70% of the food we consume is imported, making food prices sensitive to exchange rate fluctuations. Inter-provincial trade barriers and supply management policies for poultry, milk, cheese, and eggs also contribute to high fresh food prices and lower margins for grocers. These factors have largely protected Canadian grocery chains from the price wars that have swept through the US and Europe[ii] despite ongoing low-price competition from Walmart and Costco.

It is tough to know how much demand for grocery e-commerce ultimately exists. Canadians are highly price-sensitive in buying groceries, and there will still be a large subset of the population who want to personally examine their fresh produce prior to buying it. Nonetheless, given the devastation e-commerce has caused on other sectors of retail, it is interesting to examine its potential impacts on the Canadian grocery sector – and one can learn a lot about the quality of a company’s management based on the way it responds to change and invests for the future.

The healthy margins and dominant market shares have caused the Canadian grocery sector to be understandably cautious about investing in e-commerce. Why invest in something that is logistically more expensive, reduces basket sizes, cannibalizes the existing store base (and long-term leases), and importantly, provides enhanced price transparency for consumers[iii]? In short, e-commerce undoes literally everything that the supermarket chains have been building towards for their entire corporate lives.

As in other segments of retail, Amazon was the cataclysmic event with its acquisition of Whole Foods that forced a sleepy sector to wake up and each major supermarket chain has announced major e-commerce initiatives since 2017:

Loblaws launched the PC Express program on May 2018. It offers online order and pickup at Loblaws stores and other select drop-off locations including Shoppers Drug Mart, transit stations, and condo lockers for a small fee. Home delivery efforts so far are limited to an Instacart partnership, where an Instacart shopper picks the food and delivers it to your home (Costco and Walmart also provide two-hour delivery through Instacart).

The management is very clear in their belief that click & collect is the model for them.

“Certainly, our view is today that click & collect is in the best interest of the customer and that the Canadian consumer’s responding really well to the service. Is home delivery going to be a part of it? You’ve got a few people experimenting; we’ll watch that closely. We might experiment, but at this point, I don’t think anybody’s reached a conclusion that that is the best path forward for grocery.”

Loblaws strategy is capital-light and relies heavily on the existing infrastructure and store footprint. PC Express orders are fulfilled by human shoppers and instead of opening dedicated fulfillment centers, Loblaws is converting existing stores into micro-fulfillment centers.

Metro’s approach to e-commerce is similar to Loblaws: provide click & collect in-store and outsource home delivery to a third-party, in this case, Uber-backed Cornershop.

Metro’s management is coy in providing details for the e-commerce strategy, and the rollout has been slow with click & collect available in just 9 stores in Quebec today.

Sobeys’s approach to e-commerce differs, and is built on its partnership with Ocado, a UK supermarket technology platform. Instead of using its existing stores as mini-fulfillment centers for in-store pickup, Sobeys is building robotic warehouses dedicated to home delivery which can reportedly fulfill a 50-item order in 6 minutes. In places like Atlantic Canada that do not have the population to support warehouses, Sobeys will use Ocado technology for a curbside pickup model. 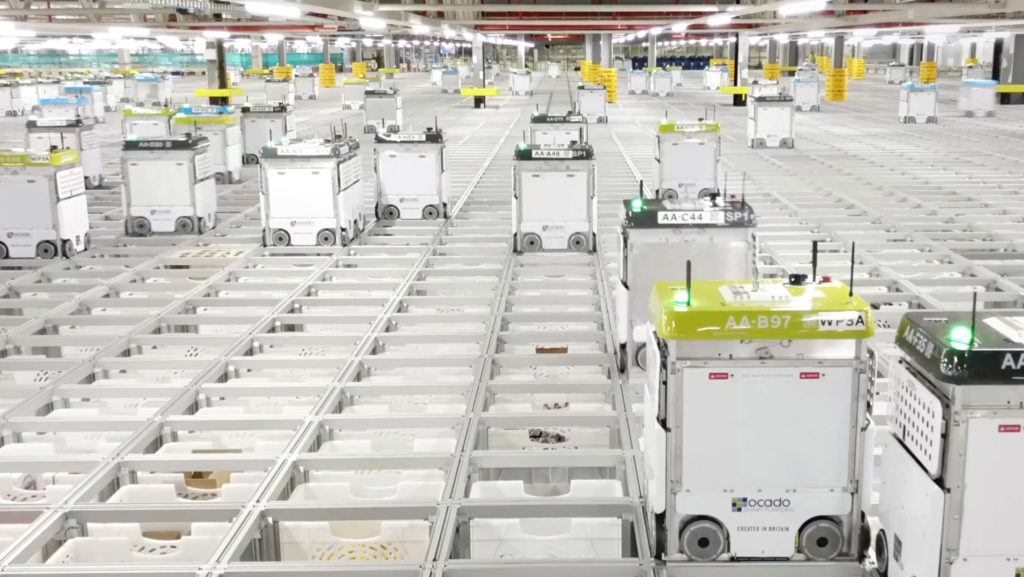 The online offering branded as “Voilà by Sobeys” launched in June for Toronto and is planning to launch in Ottawa and Montreal for 2022. Empire’s management has been vocal about their view that home delivery is 1) superior to in-store pick up models, and 2) the preferred method long-term for consumers.

Walmart & Costco’s efforts are mostly restricted to 3rd party partnerships today, but continue to gain share in physical retail as low-cost destinations. There are a handful of gig-worker startups that are aiming to disrupt the market, but are structurally uncompetitive on price without any direct sourcing skills or infrastructure.

Who will be the winner?

It’s worth noting that in-store traffic will still be the dominant grocery model for the foreseeable future. The Canadian grocery market is currently worth around $100 billion and even a much higher 5% e-commerce penetration rate at a generous 5% margin would imply a profit opportunity of just $250 million. It is also unlikely there will be a one-size-fits-all approach: the beauty of the internet is in its flexibility and consumers will want different services for different scenarios.

Grocery delivery is also not necessarily a winner takes-all market. As noted above, companies have different market shares and brand awareness in different provinces, and e-commerce success in Toronto does not have any relation to success in Vancouver. Case in point: Longo’s, a small high-end private chain in Toronto, was one of the first supermarkets in Canada to launch home grocery delivery and appears to be doing fairly well.

With this in mind, each company’s e-commerce strategy is reflective of their current market positioning:

Is Amazon a threat?

As Ben Thompson beautifully explains in Stratechery, Amazon’s primary motivation in acquiring Whole Foods in 2017 is to acquire a customer base that will bring immediate scale to its grocery efforts and serve as a launchpad for other businesses such as restaurant delivery.

I fully expect Amazon to launch same-day grocery delivery in Canada at some point and one never wants to underestimate Amazon, but the problem with this thesis is that Whole Foods’ presence in Canada is very small with just 14 stores[iv] (just one opening since 2017), and reportedly does not have any distribution centers in Canada. If this is true, it would make it all but impossible to fulfill groceries at an acceptable scale to the millions of Canadians who have Prime membership. Inter-provincial trade barriers, supply management policies, and a Canadian antitrust investigation (despite its relatively small scale) make the effort that much greater.

My general thought around e-commerce for grocery is that it is much more of a threat than an opportunity for Canadian grocers, though the same players overall are well positioned to maintain market share for the same reasons they always have. It will be interesting to watch how Amazon launches same-day grocery delivery, how chains manage their banners across the real estate footprint, and how chains like Loblaws can use e-commerce to potentially deepen their direct customer relationships.

Canadian consumers, for their part, will benefit from the better pricing and improved convenience in groceries, in short, for the same factors that the internet has brought in other aspects of life.

[i] The real estate of Loblaws and Empire are publicly traded REITs.

[ii] German discount chain Lidl had explored a Canadian entry in 2004, but ultimately decided against it given the lack of suitable real estate.

[iv] Anecdotally, Whole Foods is in a strange place in Canada today. After cutting prices, Canadians still view Whole Foods as an expensive supermarket, but perhaps without the prestige of niche stores like Pusateri’s or McEwan.