Many suggest that “it feels like a recession.” Much of the US data, however, suggests that it shouldn’t. The latest evidence can be found from just last week when the reported Black Friday sales figure increased year-over-year by a strong 6.6% (based on a survey of 40,000 retail locations). While this number is not historically correlated to holiday sales, it does show one thing. The consumer is anything but weak.

Any economic recovery relies on consumer participation. After all, consumer spending traditionally accounts for 70% of the country’s Gross Domestic Product (GDP). Market participants closely watch consumer sentiment and retail sales data to better understand what the consumer is thinking and doing. However, former US Federal Reserve Chairman Alan Greenspan once remarked that he watched what consumers would do, not what they would say. For that reason, the retail sales data accompany greater significance than confidence numbers. After all, GDP is the summation of sales receipts rather than telephone surveys.

Though the market reacts to many more numbers than just retail sales, it is nevertheless an important indication that the US economy is stronger than many might think. Should data continue to improve, the nervousness in the stock market over the Eurozone will begin to subside. Evidence such as this retail sales chart bolsters the assertion that the stock market is presently undervalued and poised to appreciate. 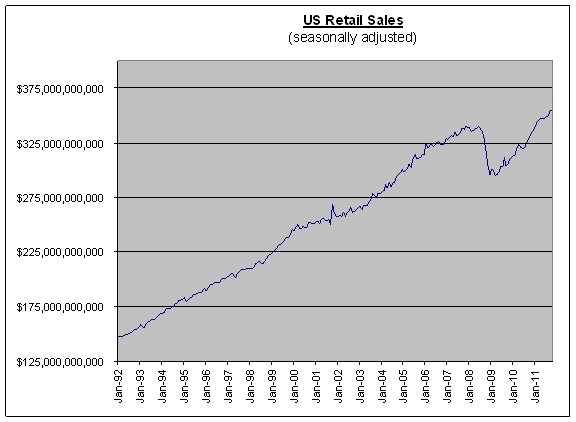