During May, the outlook for interest rates and inflation continued to rise, consumer demand weakened, supply chain constraints appeared to be getting worse, and the Ukraine/Russia conflict showed no sign of ending. Despite headlines that are certainly not improving, the S&P 500 ended the month exactly flat, and the technology-heavy NASDAQ was down just 3%. This result was encouraging because it suggests that investors are no longer reacting as harshly to bad news. As Barry noted during our Shaken but not Stirred presentation in April (which can be viewed here), stocks start going up far in advance of any actual improvements in the situation.

A good sign that stocks may have bottomed is that many companies reported poor first quarter results and also provided weak outlooks for 2022, but still saw their shares go up. As an example, Dick’s Sporting Goods (NYSE: DKS) was a “COVID winner” as people purchased exercise and fitness equipment during COVID lockdowns. During its earnings result on May 25, Dick’s slashed its outlook for 2022 citing the uncertain economy, but still saw its share price go up on that day.

Has the stock market really bottomed or is this a “dead cat bounce?” Despite the encouraging signs, the reality is that nobody knows, and that it is a waste of time and energy to worry about where stocks will go in the next month or two. I also don’t think one can predict what sector will outperform in a short period of time as well. 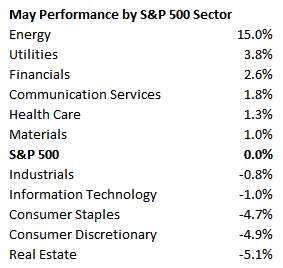 Energy has performed well during 2022, but this was not at all obvious in 2020 and 2021 given the prevailing narratives of shift to renewable energy and abundance of shale oil in the US. Another example: Consumer Staples had been one of the top performing sectors through 2022 as investors shifted their portfolios towards companies that are perceived to be more resilient during a recession. Yet, Consumer Staples was one of the worst performing sectors in May after Wal-Mart and Target reported weakening consumer demand.

The lesson here is not that the investor should have bought Dick’s Sporting Goods or sold Consumer Staples stocks, but that short-term movements are largely unpredictable and as such, are not something that investors should worry about.

The more relevant question is how an investor should manage their portfolio during a broad market correction. Many investors seem to respond in one of two ways: 1) through aggression by doubling down on their losers (both sector and individual names) or 2) through panic by selling their losers and increasing exposure to cash and “protecting” their portfolios by buying the stocks/sectors with the best near-term performance.

Although the second response of selling losers to buy safety (currently Energy, Utilities, and Consumer Staples) is psychologically comforting, it is unlikely to perform well over time simply because the investor is selling low to buy high.

However, the problem with the first response is that it can lead to anchoring bias and analytical blind spots. It is human nature to assume losses in your portfolio are due to the market’s irrationality, rather than admit analytical errors or that the situation has changed.

There is a third response, which is to find opportunities to increase the quality of the portfolio. In broad market sell-offs, the stock market often throws the proverbial baby out with the bathwater, providing investors with the opportunity to purchase high-quality businesses at relatively attractive prices.

The difference between this and the first response is that the focus is on the long-term. The first response is merely looking to recover losses by positioning their portfolio for the near-term bounce. The focus is mostly on the stock price movement rather than the underlying quality of the business. As discussed above, short-term movements are largely unpredictable. What is predictable is that the quality of the business is what ultimately delivers long-term results.

One company that we recently purchased as a result of this process is Adobe. Adobe sells creative tools such as Photoshop, Lightroom, Illustrator, and Premiere to photographers, visual artists, animators, and designers. This is a fantastic business that generates recurring revenues at very high margins with strong pricing power and should continue to grow as society produces and consumes an ever-increasing amount of digital content. We have followed Adobe for a long-time but have felt that the stock was too expensive. This changed as Adobe was dragged down by the rest of the technology sector and is now trading at what we consider to be a fair price.

To be sure, we also think that the companies that we sold to purchase Adobe were undervalued (as is the case in a market correction), and in most cases were trading at lower multiples than Adobe. However, we think that Adobe is the superior business with better growth prospects and less competition, and that is ultimately what will matter in the end.

Paul Krugman on why the economy is better than you think

Howard Marks on the psychology of markets